Evil and the Justice of God: Setting Things [W]Right 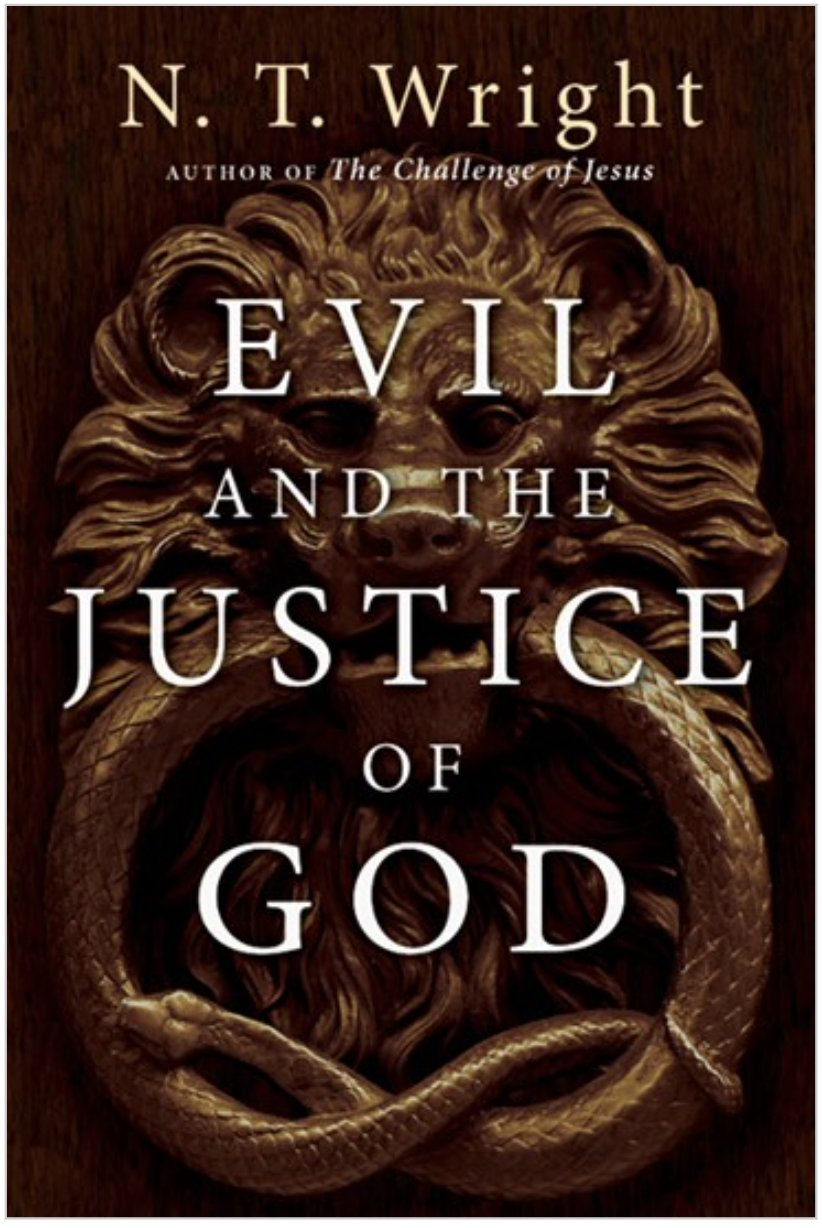 Once again N. T. Wright has done an eloquent job articulating a very difficult teaching that so many for so long have wrestled with intellectually, existentially, or both. This short book goes a long way toward building a framework for understanding practical ways to live in the brokenness of creation under the cross-bearing, victorious God of creation.

The so-called “problem of evil” has been around at least since Augustine and, while philosophers have delighted in trying to solve the puzzle of God’s goodness in the face of evil’s reality (also known as theodicy), Wright unashamedly promises not to satisfy this philosophical quest. “Evil isn’t simply a philosophers’ puzzle but a reality which stalks our streets and damages people’s lives…the quest for a solution is not a quest for an intellectually satisfying answer” (pp. 149-150). Instead, readers are invited and challenged to think in new categories that enlarge their view beyond the tidy grid that philosophers have assembled over the centuries. One of the many pointed sayings that shows Wright’s penchant for orthopraxy is:

We are called not just to understand the problem of evil and the justice of God, but also to be part of the solution to it. We are called to live between the cross and resurrection on the one hand and the new world on the other. We are called to bring the two together in prayer, holiness and action within the present world.

There is much I could say about each chapter, but I would like to comment on the final one. I suppose it’s no mistake that this continues a thread that I recently wrote regarding forgiveness. As mentioned in a previous review, Chris Brauns’s Unpacking Forgiveness shows the biblical data insists that forgiveness is costly and requires repentance before it can be granted. And, I do believe this best fits Scripture. However, Wright has another twist on forgiveness that, as far as I understand it, is not exactly contradictory to what Brauns offers, though perhaps it is complementary.

When coming to the final chapter, “Deliver Us from Evil”, a unique alignment is offered between two unlikely subjects: evil and forgiveness. Admittedly (it was certainly true for me), “many readers will be familiar with the [inner dynamic of forgiveness]…but fewer will have connected it with the larger overall problem of evil itself” (p. 135). Exactly how does forgiveness relate to and satisfactorily answer the problem of evil? While forgiveness may not speak to the origin of evil, says Wright, it does set things right in the present as it certainly does in God’s future. Forgiveness is the means whereby evil is conquered as we move forward on our journey to the new heavens and new earth (Note: Understanding Wright’s “inaugurated eschatology” is pivotal for understanding Wright here and Wright in toto).

As I said in the previous review, “forgiveness, as a gift, is intended to benefit the offender, not just the offended.” The emphasis there was upon the responsibility of the one causing the offense. In Wright’s book, however, he highlights a different angle from the perspective of what forgiveness does in and for the offended; the one offering forgiveness.

Reading enough of N. T. Wright will quickly show that “different angles” are in surplus for him, which is another way of saying that many theologians today have not been very keen on “new perspectives!”

In effect, what Wright says is that the act of offering forgiveness to an offender essentially overcomes evil by empowering the offended with the requisite freedom necessary to love the offender. Love has the final word, not the offense. Before forgiveness is offered, the offended is rightfully angry with the offender because of the offense. Yet this anger, Wright contends, becomes the controlling influence over the relationship when a breach is realized. Thus, there is a kind of psychological bondage whereby the relationship is held hostage to the evil committed. Offering forgiveness loosens the bonds of emotional slavery and opens the doorway to love the evildoer.

In Wright’s own words (borrowing from Miroslav Volf’s Exclusion and Embrace): “If I have named the evil and done my best to offer genuine forgiveness and reconciliation, I am free to love the person even if they don’t want to respond” (p. 133) or “when we offer genuine forgiveness to someone else we are no longer conditioned by the evil that they have done—even if they refuse to accept this forgiveness” (p. 141). Since “we are in fact called to be people of forgiveness in the present because that is the life we shall be living in the future,” the master of evil can be conquered now by offering forgiveness, the same forgiveness that someday will characterize our future when the “mental pain of unresolved anger and bitterness will be done away with, as we are enabled fully and finally to forgive as we have been forgiven” (p. 145).

Forgiveness, then, “releases not only the person who is being forgiven but the person who is doing the forgiving.” Forgiveness is saying in effect “I release you from any burden of guilt, any sense that I might still be angry with you when we meet tomorrow, or that I will treat you differently in the future or try to get even with you. But I also release myself from having to go to bed cross, from having to toss and turn wondering how to gain my revenge” (p. 159).

According to Wright, forgiveness is not only a healing power but the reigning power over evil. And so, “the continuing presence and power of evil in the present world cannot blackmail the new world and veto its creation because the power of forgiveness, organically linked to the power of Jesus’ resurrection, is precisely that it enables both God and God’s people to avoid the imposition of other people’s evil.”

If my assessment approximates Wright’s position, I would like to offer some final remarks and propose a synthesis between Wright and Brauns. I stand by the categorical distinction, spelled out in detail by Brauns, between offering forgiveness and granting forgiveness. These are not the same. The former is a posture, the latter is a transaction. I think it is extremely valuable and thoroughly biblical to live in a constant state of “ready-to-forgive,” the steady state of offering forgiveness. That is the burden of Wright, as I understand. How many times must we forgive our brother or sister? “I tell you, not seven times, but seventy-seven times” (Matthew 18:22). Granting forgiveness to an offender, however, when the biblical condition of repentance has been fully met, is the burden of Brauns, as I understand. “If a brother or sister sins against you, rebuke them; and if they repent, forgive them. Even if they sin against you seven times in a day and seven times come back to you saying ‘I repent,’ you must forgive them” (Luke 17:3-4).

The only way for us to be in the place where we can offer so much forgiveness so often is by leaning forward in a ready-to-forgive posture even as we lean backwards on the already-forgiven status we have received at the cross. Lean too far forward and we miss the necessary justice God has shown to us in the cross. Lean too far backwards and we miss the healing love of God shown to us in forgiveness. Maintaining just the right position in the fulcrum is the only posture from which the offended will find peace and where offenders will find love. In so doing, evil will not have the final word. I’m hopeful that neither Brauns nor Wright would disagree.

There is much to learn from N. T. Wright in these five chapters. While it’s no surprise that Evil and the Justice of God has generated some critique (see especially D. A. Carson’s full response at Review of Biblical Literature or you may download it here), the practical benefits of facing evil with the power of forgiveness, as well as the robust intellectual challenges of fresh thinking on a topic that touches everyone, makes this a worthy read.

Spread the word (please & thank you)
2009-02-04
Previous Post: Is Wright Right about Justification?
Next Post: On the Chemistry [Metaphysics] of Regeneration