My good friend Louis over at Baker Book House notes the importance of letting Scripture speak to us rather than us speaking to Scripture. In a recent post he quotes an important insight from N. T. Wright’s Justification: God’s Plan & Paul’s Vision:

If you read your own question into the text, and try to get an answer from it, when the text itself is talking about something else, you run the risk not only of hearing only the echo of your own voice rather than the word of God but also of missing the key point that the text was actually eager to tell you, and which you have brushed aside in your relentless quest for your own meaning. (Wright, p. 42)

Correspondingly, John Walton says in his newest release entitled The Lost World of Genesis One:

All of these issues are modern issues imposed on the text and not the issues in the culture of the ancient world. We cannot expect the text to address them, nor can we configure the information of the text to force it to comply with the questions we long to have answered. We must take the text on its own terms–it is not written to us. Much to our dismay then, we will find that the text is impervious to many of the questions that consume us in today’s dialogues. Though we long for the Bible to weigh in on these issues and give us biblical perspectives or answers, we dare not impose such an obligation on the text. God has chosen the agenda of the text, and we must be content with the wisdom of his choices. If we attempt to commandeer the text to address our issues, we distort it in the process. (Walton, p. 21)

Louis ties these two ideas together noting: “Both Wright and Walton are prepping the reader for what is to come and the necessary ground work for that is, in part, to make them aware of how terribly easy it is for us to impose our own thoughts and concepts on to a text.”

In my own words, the Bible says what it means and means what it says; nothing more and nothing less. God does not need help with inspiration and it is our task to work hard at not importing our own ideas into the text. Consider the familiar nursery rhyme “Mary Had a Little Lamb,” of which the first two stanzas read:

Mary had a little lamb,
whose fleece was white as snow.
And everywhere that Mary went,
the lamb was sure to go.

It followed her to school one day
which was against the rules.
It made the children laugh and play,
to see a lamb at school. 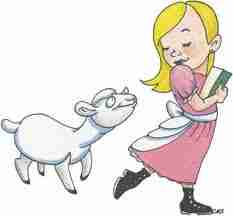 Just looking at the text (without cartoon-like pictures of cute little girls with bobbie socks) we can ask some basic questions.

Chances are, without our traditions and images, we would not even ask these kinds of questions. But, by asking them we readily show how much of our own ideas and traditions have been joined to a text, but which may not be anywhere near the text. Remember: What the Bible says, God says and there is plenty of rich meaning to mine without adding any of our own.

5 thoughts on “Interpreting the Bible, Nursery Rhymes, or Just About Anything Else”