Man and Woman, One in Christ: An Exegetical and Theological Study of Paul’s Letters, chapter 16 titled “1 Timothy 2:8-15: Introduction: The Ephesian Church Situation Addressed in 1 Timothy” begins discussions over the most crucial passage on women leadership in the Church. Payne shines a spotlight on authorship, historical situation, and the cultural background of Ephesus where Timothy was a pastor.

Clearly false teaching is in the forefront of Paul’s mind when writing to Timothy about the Ephesian church (see also 2 Tim 2:16-17). Paul is not, says Payne, merely providing a manual for church order, but writing a specific charge to Timothy advising him to guard against false teaching.

How do women factor into this discussion about false teaching? Payne argues “Paul repeatedly describes women using identical or similar expressions he uses to describe the false teachers” and says “no other book of the Bible has a higher proportion of verses focused specifically on problems regarding women.” The following table, taken from p. 300 and used with the author’s permission, shows these parallels. 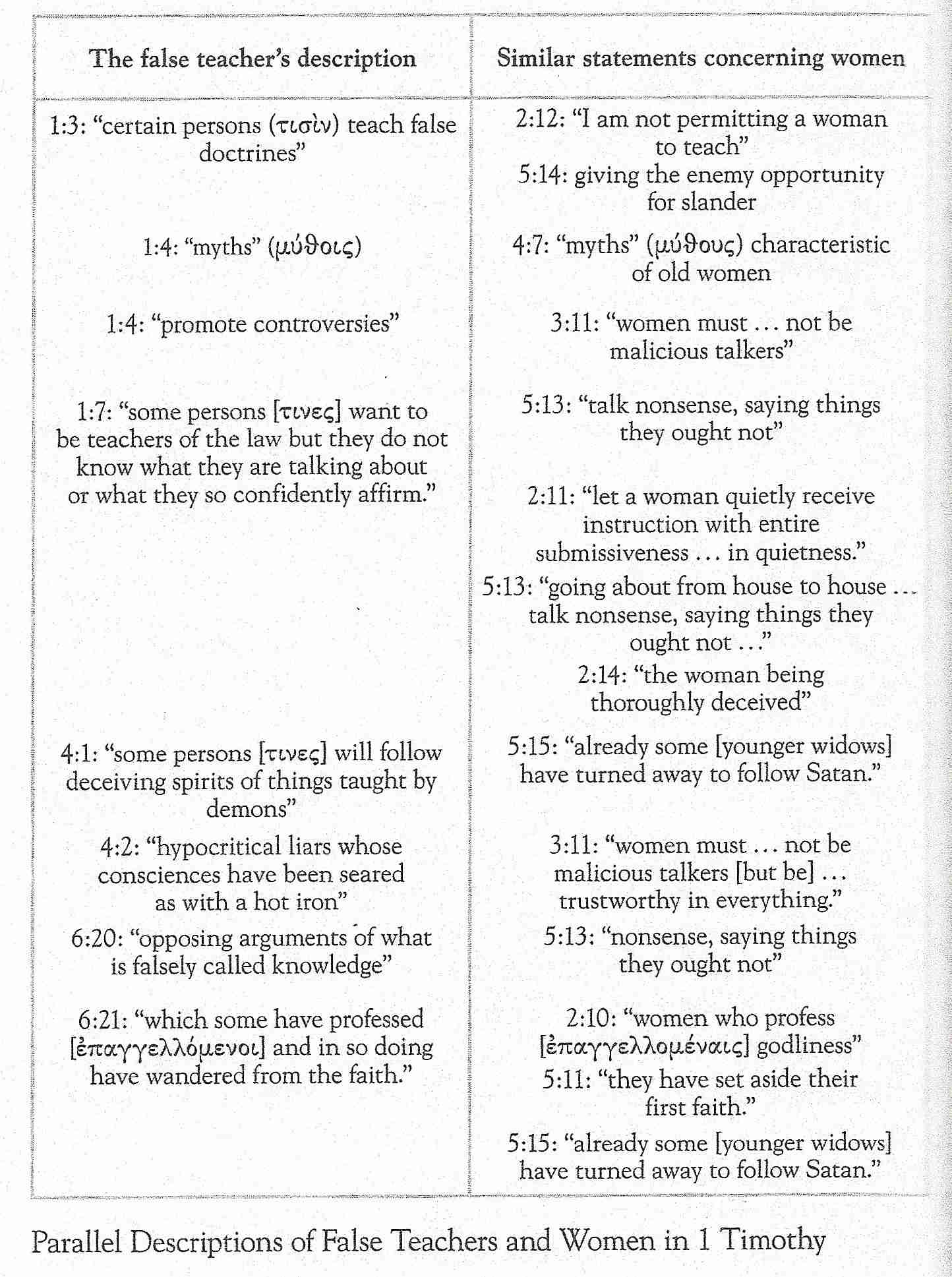 Not only were women being subjected to false teachings, but these Pauline parallels between false teachers and women, combined with Paul’s instructions to Timothy that women not teach, strongly suggests women were involved with spreading false teachings.

Supporting the notion that women in Ephesus were involved in advancing false teaching, Payne shows that being “gossips” (1 Tim 5:13, φλυαροι) means “conveying rubbish philosophy, for nonsense is what the term normally describes.” And, quoting Gordon Fee (see p. 301, note 22 for reference), “there is no known instance in Greek where the word phlyaroi means ‘gossips.'” In fact, “it is difficult to imagine Paul saying that these women had ‘already turned aside to follow Satan’ (1 Tim 5:15) if φλυαροι meant merely gossips and had nothing to do with false teaching.” After all,

the obvious reason why Paul bases his argument for limiting teaching by women on Eve’s deception (1 Tim 2:14) is that false teaching had deceived women in Ephesus. Eve’s deception epitomizes serious theological deception. Since Ephesian believers probably met in house churches, the reference to younger widows going “house to house…saying things they out not” in 5:13 may refer to house churches. This “rubbish” [gossip] propounded by women had a serious effect on the church…The descriptions of the false teaching as rubbish (1:4-7, “myths, meaningless talk”; 6:20, “falsely called knowledge”‘ 2 Tim 2:23, “foolish and stupid arguments”) supports understanding φλυαροι as referring to women conveying the false teachers’ rubbish, not merely gossiping.

The areas of “forbidding marriage, saying that the resurrection has taken place, and abstaining from certain foods express an overly realized eschatology.” Thus, “the false teachings would appeal particularly to women in Ephesus, especially widows, since having no husband, they were social outsiders relegated to the fringes of power in their society.” An overly realized eschatology could appeal to a single woman’s false sense of dignity, suggesting they were already in an ideal state and no self-improvement was necessary. Likewise, false teachers promoted a false dualism that showed no regard for the material body (pre-Gnostic fodder); only the spiritual/immaterial aspects of humanity had import. Consequently, the false teachers “worm their way into homes and gain control over weak-willed women…loaded down with…evil desires” (see 2 Tim 3:4-6), providing single women and the false teachers justification for illicit sexual relations. If Payne is correct that some women in Ephesus were subject to these false teachings, and given the intent of this letter is to warn Timothy against false teachings, then it’s not hard to view Paul’s injunction for women not to teach as a “compromise” or “practical solution” (see 1 Tim 2:11-12). These women should learn (1 Tim 2:11) and be grounded in “the faith,” but they must not teach (1 Tim 2:12).

The next post will cover chapters 18-20 as they comprise a 3-part series on 1 Tim 2:12, the central teaching purported to prohibit women teaching men in the Church.

1 thought on “Insights from Man and Woman, One in Christ: Part 7”