Worshipping and Being Human: Connecting the Dots 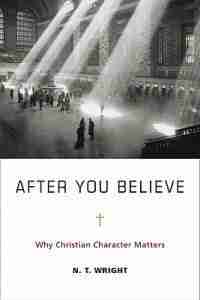 In After You Believe: Why Christian Character Matters N. T. Wright says Romans 12 is “the start of the ‘so what’ section of Romans.” Profering a connection between Romans chapter 1 and chapter 12, Wright insists the “renewal of the mind is at the center of the renewal of the whole human being, since the “darkening” of the mind was identified as central to the problem of idolatry, dehumanization, and sin in an earlier chapter of Romans.” Before making the connection to which Wright speaks more explicit, listen first to the texts (Romans 1:21-23, 28; Romans 12:1-2; Wright’s translations):

Though they knew God, they did not glorify him as God or give him thanks, but became foolish in their reasonings, and their senseless heart was darkened. Giving themselves out to be wise, they became fools, and they exchanged the glory of the immortal God for the likeness of the image of mortal humans, and birds, animals and reptiles. . . And, just as they did not “see fit” to hold God in their mind, God gave them up to an “unfit” mind, to do things that are inappropriate.

So, my dear family, this is my appeal to you by the mercies of God: offer your bodies as a living sacrifice, holy and pleasing to God. This is your true and appropriate worship. What’s more, don’t let yourselves be squeezed into the shape dictated by the present age. Instead, be transformed by the renewing of your minds, so that you can work out and approve what God’s will is, what is good, acceptable and complete. [12.1-2]

The words for “see fit” and “unfit” [from Romans 1] are from the same root as “work out and approve” (dokimos, dokimazein) in 12.2. Once again this is hard to bring out in translation, but essential to grasp if we are to understand Paul’s overall flow of thought. The mind that is in rebellion against God, that refuses to worship him, becomes “unfit”—that is, incapable of thinking straight about what constitutes appropriate human behavior—whereas the mind that is renewed will learn the habit of clear, wise thinking and approval. The “unfit” mind is, in Romans 1, the root from which a whole host of evil things grow, all of which in Paul’s understanding reflect the fracturing of the “image,” alluded to here in a passage which clearly has the first few chapters of Genesis in mind. It isn’t the case that the body leads the mind or heart astray. Rather, the failure to worship the one true God leads to a failure to think, and thence to a failure to act as a fully human being ought.

Did you get that sequence? Failure to worship God leads to a failure to think rightly. And, failing to think rightly leads to inappropriate behavior, since our behavior is the product of our thinking. Ultimately this progression contributes to a “fractured” human existence that is less than fully human, less than optimal living as we’re intended. It’s not as though we must simply think straight to act straight, though this is important. The starting point is and must be worship of the one true God. This, I suspect, is the reason we’re made in God’s image; the reason humans above all other creatures are unique. We are hardwired for worship! If we don’t get this function right, then everything else will be upside down, fractured, disconnected, sub-optimal. (Incidentally, much has been made of the “cognitive consequences of sin.” See Alvin Plantinga’s Warranted Christian Belief. No doubt King Saul would be an interesting case study to this end, cf. 1 Samuel.)

Conversely, worshipping the one true God with our whole being (Romans 12:1) actually reverses the effects of sin in our lives and gradually restores the imago Dei within.  Thus, the result of devoting our lives to God is an ordered thought life, behavior that is in line with God’s will, and the consequent enjoyment of a full human existence that God intended all along. In other words, there is a direct link between worshipping God and being fully human. Needless to say the implications are staggering (especially for atheists!). If Wright has it right here, it’s time to connect the dots!

Spread the word (please & thank you)
2010-03-22
Previous Post: The Scope of Doctrine and Redemptive Truth
Next Post: How Many People Believe What?