The Making of an [A]Theist 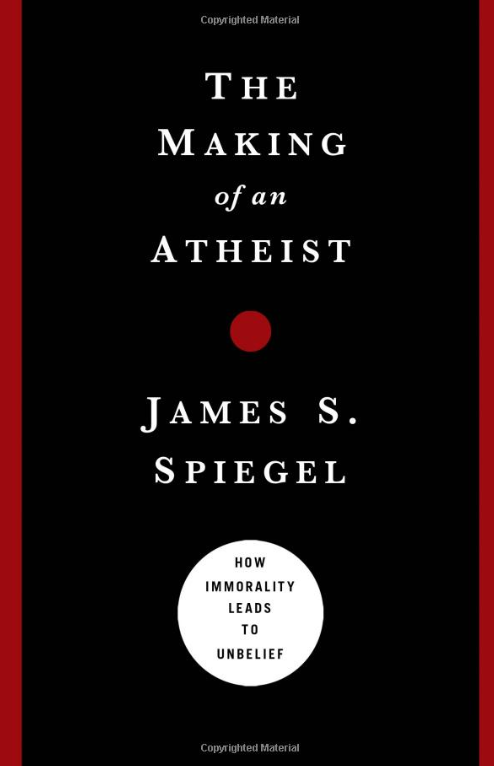 Atheism is not at all a consequence of intellectual doubts. Such doubts are mere symptoms of the root-cause—moral rebellion. For the atheist, the missing ingredient isn’t evidence but obedience. [Emphasis his.]

Clearly “there are moral dynamics involved in the abandonment of faith” (Ps. 14:1; Rom 1:18). But (and this is a large, theoretically-laden “but”), I wonder if this is backwards or even a non sequitur. Could it be first that most atheists have honest intellectual doubts and, as a result, see no reason to justify their moral behavior to a god he/she does not believe exists? After all, it makes little sense to live according to moral guidelines issued by a non-entity! If there is no moral Lawgiver, then, on an eternal scale, everyone is free to live however they choose. Naturally there are temporal consequences to going against the accepted moral guidelines of a given culture, but if the atheist’s beliefs are true she has nothing to fear beyond death.

Supporting his thesis, Spiegel marshall’s Alvin Plantinga’s findings (see Warranted Christian Belief) showing that atheists cannot know their beliefs are true given a priori commitments to Darwinian naturalism, which has no mechanism for discerning the truth of beliefs. Consequently, atheists are “cognitively handicapped…[and] genuinely desensitized to truth such that they cannot perceive it even when they encounter it” (p. 57). The God-given spiritual receptors are deadened by a life lived in rebellion. Thus, the atheist is condemned to a kind of self-defeating epistemic futility.

If Spiegel’s thesis is correct, could this angle work for the making of a theist? Can good conduct result in enhanced cognitive abilities that lead to belief in God? Could our spiritual receptors be enlivened by living a life of obedience? Immediately Blaise Pascal‘s famous Wager comes to mind. Although Spiegel did not bring up the Wager (nor did he show how Romans 2:14-15 might bear on his thesis!), at least an endnote acknowledging this angle would have been nice. Perhaps he plans a sequel “The Making of a Theist.”

Sidebar: The Making of a [Pascalian] Theist

As Pascal insists, one cannot suspend a commitment to the existence of God and remain on the fence indefinitely. When the fence-sitter recognizes that a wager must be made (since failing to wager is itself tantamount to wagering), Pascal calls on her to enter into a kind of “spiritual experiment.” In fact, it is at this point that Spiegel’s thesis is aided by Pascal who claims that unbelief is “because of your passions, since [prudential] reason impels you to believe and yet you cannot do so.” That is, one’s passions (i.e., moral behavior) gets in the way of what is prudent to believe. Instead, Pascal enjoins his skeptic to curb their passions so as not to “counteract the clear command of prudential reason” (see Groothuis, p. 80 On Pascal). Upon doing so, “the doubter will end up believing quite naturally and will become more ‘docile,'” which means a kind of “neutralizing of these inhibiting passions such that belief becomes possible” (Groothuis, p. 84).

Following Augustine, Pascal maintained that one is either motivated by “concupiscence or charity—in other words, by one’s fallen nature or by grace. If one is dominated by concupiscence, religious truth is unavailable. If one is willing to suspend or at least attenuate foul passions, charity may break through and faith ensue” (Groothuis, p. 85). Thus, the making of a theist could involve a kind of challenge or wager to enter into a “spiritual experiment” by living as if there is a moral Lawgiver thereby increasing one’s chances to believe that God exists. Pascal’s charge to his skeptic is telling for the making of a theist:

Why Pascal was not invoked remains a mystery, since the Wager would have enhanced Spiegel’s thesis. Whether or not he sufficiently tells the whole story of unbelief, Spiegel has contributed some important insights on the relationship of moral psychology to atheism. And, despite my spin on the book’s thesis and excursus (rant?) about Pascal, The Making of an Atheist deserves a careful and thoughtful read.