In: Apologetics, Faith and Reason 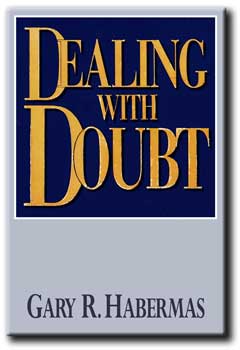 I just discovered that Gary Habermas’ book Dealing with Doubt is available free in its entirety at his website here. This is a keen analysis with sage advice on dealing with and healing from doubt.

Here’s a blurb from the chapter on emotional doubt:

To illustrate the affect of one’s feelings on one’s reason, [C.S.] Lewis likens his own response to the medical usage of anesthetics. Though completely convinced on good grounds that the anesthesia will do no harm, he witnessed that when it was time for it to be administered, “a mere childish panic begins inside me . . . . I lose my faith in anesthetics.” It is not reason warring against faith here because for Lewis, faith is based on reason. Rather, “The battle is between faith and reason on one side and emotion and imagination on the other.” [Lewis, Mere Christianity, p. 124]

This analogy is reminiscent of another which is employed by Blaise Pascal, a Seventeenth Century French philosopher and mathematician who quipped:

If the greatest philosopher in the world find himself upon a plank wider than actually necessary, but hanging over a precipice, his imagination will prevail, though his reason convince him of his safety. Many cannot bear the thought without a cold sweat. I will not state all its effects.

I think that the affect of Pascal’s illustration is even more gripping, for many of us can indeed understand his point only too well. The reasonable conviction that we can walk across a board that is sufficiently wide (especially if we have done it many times before) does little to assist us if that object is placed across a chasm. In such a circumstance, reason is at the mercy of one’s imagination. For those of us who value our reasoning faculties, this is a sobering (and even a humbling) thought, but it is so frequently true. It aptly describes the plight in which humans find themselves when imagination conquers reason.