Before leaving the great state of Colorado, for a number of years I met each Friday morning with two dear friends and fellow brothers in Christ. Whether praying together, studying Scripture together, or just enjoying the company of each other, I looked forward to our meetings. At one point we agreed to invite one other person to join us, himself the pastor of a new church plant. Typically we would open up our time sharing how our week had gone. One meeting, the new member said that his week included an argument with his wife and, after realizing he was wrong, he apologized to his wife. Almost immediately another member in our group asked “But, did you ask for her forgiveness?”

After a pregnant pause and startled look (the deer in the headlights doesn’t begin to compare to this guy’s expression!), the pastor admitted he had not asked his wife for forgiveness. Although many years ago now, I will likely not forget that moment since it highlights the profound and important difference between apologizing for our wrongdoing versus asking for forgiveness. The former typically expresses some kind of regret, whereas the latter suggests an action will be taken to right a wrong committed. Apologies, like “I’m sorry,” may show regret for what has been done, but asking for forgiveness includes at least an apology and a commitment not to do again what has been done. 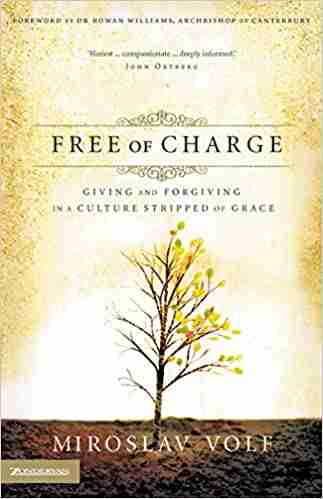 Free of Charge: Giving and Forgiving in a Culture Stripped of Grace.

Before they begin, however, I would like to go on record as saying (not sure who’s actually keeping records) that the jury is still out whether or not I agree entirely with all that Volf has written. For example, I see no reason why most of what he has said could not be couched in the notion of God offering forgiveness without going the extra distance in maintaining that God actually grants forgiveness before repentance.

Despite occasional reservations, this book, along with Chris Brauns’s Unpacking Forgiveness (my review here), simply must not go unnoticed. It parses out virtually every conceivable relationship between forgiver and forgived, offender and offended and provides some practical and profound advice. Moreover, Volf’s explanation of Christ’s substitutionary satisfaction on the cross as the basis for our ability to forgive is priceless (pp. 141-151). Readers will undoubtedly come away with a well-informed and richer understanding of what it means to be “forgiving each other, just as in Christ God forgave you.”

Volf maintains forgiveness is logically and theologically primary. It takes first place in God’s activities and must do so in ours. His reasoning goes something like this:

To support these claims, Volf states in various places:

The apostle Peter wrote that destined as God’s Lamb “before the foundation of the world” (1 Peter 1:20)…God decided to redeem the world of sin before the Creator could lay down its foundations. Each of us exists because the gift of life rests on the gift of forgiveness.

God doesn’t angrily refuse forgiveness until we show ourselves worthy of it by repentance. Instead, God loves us and forgives us before we repent…God’s forgiveness is not reactive.

Offenders often seem unable to redeem themselves on their own. They need help from the victims of their misdeeds. By forgiving, victims enact a divine kind of love toward their enemies — and help overcome evil by the power of good. But both parties need to participate in the process for it to be complete…Forgiveness does not cause repentance, but it does make repentance possible.

[Forgiveness is] not primarily to benefit ourselves…In the Christian account of things, we forgive because we love — specifically, because we love our debtors, our offenders, and even our enemies. The same love that motivates forgiveness pushes forgiveness not just from exclusion to neutrality, but from neutrality to embrace….Forgiveness doesn’t stand alone, as a punctual act or even as an isolated practice..Rather, it is embedded in a way of life that is committed to overcoming evil by doing good. That’s how Luther interpreted “forgetting” in the phrase “forgive and forget.” Not to count the offenders guilty and not to press charges against them is important but insufficient. Luther insisted that you should “load” the enemy “with kindness so that, overcome with good [Romans 12:21], he will be kindled with love for you”.

When God forgives, offenders need to respond in faith and repentance. But what if they don’t repent? Like a package, forgiveness will then be stuck between the sender who dispatched it and the recipient who refuses to receive it…

Because God has forgiven, we also have the power to forgive. We don’t forgive in our own right. We forgive by making God’s forgiveness our own.

All sins against us are also sins against God. Every wrong committed against a creature is a sin against the creator.

On justice and the possibility of forgiveness, Volf says:

If on the bottom line of our lives lies the principle that we should get what we deserve, whether good or ill, forgiveness will sit uncomfortably with us. To forgive is to give people more than their due, it’s to release them from the debt they have have incurred, and that’s bound to mess up the books.

Once a culture has become litigious, forgiveness starts making less and less sense…To forgive, we need an environment in which forgiveness is valued and nurtured….Do you want to become a forgiving person? Seek the company of forgiven forgivers.

God didn’t just say, “I forgive you.” Fundamentally, forgiveness is not about saying something, not even about putting something into effect by speaking. It’s about doing something. When God forgave, he “put forward” Jesus Christ as a sacrifice of atonement….”While we were enemies, we were reconciled to God through the death of his Son” ([Romans] 5:10). Forgiveness takes place through Christ’s death.

Finally, Volf beautifully captures the necessity of maintaining our continued need for forgiveness and God’s continued granting of forgiveness:

The Christian tradition has always maintained three propositions simultaneously. Proposition one: No matter how good our inclinations, thoughts, deeds, or practices are, before the eyes of the all-knowing and holy God, we are always sinners, all of us, victims included. Proposition two: No matter how evil our inclinations, thoughts, deeds, or practices are, we always remain God’s good creatures, all of us, offenders included. Proposition three: No wrongdoing is an isolated act of the pure evil will of an individual; it is nourished by our sinful inclination and reinforced by a sinful culture….All of us forgive as sinners, not as the righteous. All of us receive forgiveness as God’s good creatures, not as despicable devils. This knowledge should counter the pride of any presumed innocence on the part of forgivers.

Volf concludes by noting that Christians are not called to forgive only, but to forgive well. We cannot merely “dispense forgiveness without any regard for how it is received by the offenders.” Since forgiveness is a gift, we must be concerned for the offender and, unless and until we hold them accountable through lovingly offering the gift of forgiveness, it will always remain incomplete. To forgive well is to move from the offense => forgiveness => repentance, => restitution => reconciliation => peace.