The Prodigal and the Padre 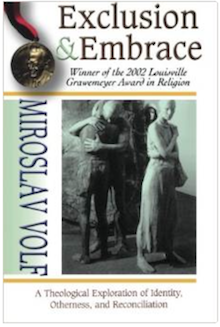 Miraslov Volf says it was the story of the prodigal son (Luke 15:11-32) that launched his “theology of embrace” for his book, Exclusion & Embrace (see previous post). Volf writes that in “some sense” the whole book is his attempt to “draw out” the social significance of this profound story between a loving father and his wayward son. Below are some highlights from Volf’s insights I found especially helpful from this most-loved, and well-known story of Scripture.

I know of no one, including myself, who does not experience a measure of dissonance, conflict, or angst in relationships. Volf’s analysis provides some keen observations (in bold below) that you may also find useful as the profiles of the prodigal and the padre are expanded.

A common portrayal of the story notes the wayward son’s foolishness as he “squanders” (v 13) his inheritance and displays significant immature behavior in his quest for independence from his father’s household. Although true of many contemporary “prodigals,” Volf argues this reading misses some important pre-modern points. The younger son’s departure was far more serious given the father’s pronouncement that his son was “lost” or even “dead” (Luke 15:24). A breach from the family to a foreign country was not only a quest to form a “distinct identity, but an act of exclusion by which the self pulls itself out of the relationships … and cuts itself off from responsibilities to others….Through his departure he wanted to become a ‘non-son’; his return begins not with repentance but with something that makes the repentance possible—the memory of sonship” (p 158). It is this relationship to others that not only gives the son his identity but it is his memory of sonship that inaugurates his healing. Ironically, the status of “son” gives him hope of restoration and yet reminds him of his waywardness. Twice in the narrative the son recognizes himself as the “son-no-longer-worthy-to-be-called-a-son” (Luke 15:18, 21), which explains his request to be treated as a “hired hand.”

One of the surprises of the story, says Volf, is the father’s permission granted for the younger son to leave with his inheritance. The father’s willing “release” of the son, however, in no way intimates his letting go of the relationship between them. “The eyes that searched for and finally caught sight of the son in ‘the distance’ (v 20) tell of a heart that was with the son in ‘the distant country’ (v 13). Away from home, the son remained still in the father’s heart.” In fact,

without the father’s having kept the son in his heart, the father would not have put his arms around the prodigal. No confession was necessary for the embrace to take place for the simple reason that the relationship did not rest on moral performance and therefore could not be destroyed by immoral acts. (p 159)

Note too, that the sequence outlined by the son was broken by the father’s embrace. The son planned to approach his father, confess, and hope for acceptance (Luke 15:18-19). However, the father’s response interrupted the son’s strategy (Luke 15:20) and so “confession followed acceptance” (Luke 15:21). This is not to say that confession did not come or was not necessary, but it was not required by the father before the embrace was extended.

This unconditional acceptance enacted by the embrace was the trigger that began to reconstruct and rebuild the son’s identity as a son. Moreover, the father’s order for the slaves to begin the celebration equally served to transform the son’s identity from a “son-no-longer-worthy-to-be-called-a-son” to a “son-he-could-be-proud-of” as he called him “my son” (Luke 15:24).

Volf goes on to outline the older brother’s response and the contrasting attitude of pride, strict adherence to the rules, and black-and-white categories of good versus bad behavior. However, the father rejects the older son’s analysis and insists instead upon relationship over rules as he affirms that the prodigal has always been “this son of mine” (Luke 15:24) and “this brother of yours” (Luke 15:32). Moral rules do not take priority over nor are they the governing authority in relationships. Though “moral performance may do something to the relationship, but relationship is not grounded in moral performance. Hence the will to embrace is independent of the quality of behavior, though at the same time “repentance,” “confession,” and the “consequences of one’s actions” all have their own proper place” (p 164).

The father’s most basic commitment is not to rules and given identities but to his sons whose lives are too complex to be regulated by fixed rules and whose identities are too dynamic to be defined once for all. Yet he does not give up the rules and the order. Guided by the indestructible love which makes space in the self for others in their alterity, which invites the others who have transgressed to return, which creates hospitable conditions for their confession, and rejoices over their presence, the father keeps re-configuring the order without destroying it so as to maintain it as an order of embrace rather than exclusion. (p 165)

Spread the word (please & thank you)
2013-04-11
Previous Post: The Anatomy of Embrace
Next Post: Louder than Words