Habituation and Life in the Spirit 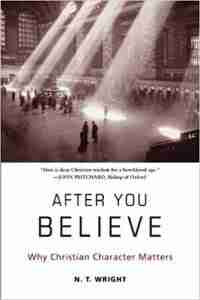 While recently speaking with a friend who is deeply grieved over a family member’s descent into sinful behavior, I was reminded of a section from N. T. Wright’s After You Believe: Why Christian Character Matters in which he notes that the transformation of our character takes place over time and the human brain is in fact involved. Wright notes “significant events in your life, including significant choices you make about how you behave, create new information pathways and patterns within your brain.” Neuroscience shows that “parts of the brain actually become enlarged when an individual’s behavior regularly exercises them” (p 37). Over time and with repeated behavior patterns, our brain actually records these connections between our behavior, our feelings, and our thoughts such that pathways are physically “carved out” as it were into the brain. Anyone who gardens knows that digging into a row to plant new seeds is easier the second time because the ground has been previously disturbed. The person who has learned to play guitar understands the value of repetition in running the fingers up and down the fret board a certain way. As this London taxi-driver study shows, our mental muscles develop memories.

London is not only one of the largest cities on the planet; it is also one of the more complex, with more one-way streets, twisting back alleys, curving rivers, and other traffic hazards than it’s easy to imagine. Before a cabbie is allowed to start work, he or she has to pass a rigorous examination testing mastery of what’s called “The Knowledge,” a process that involves memorizing thousands of street names and ways to get to those streets at different times of day or night as the traffic conditions change. The result is not just that they are the most effective taxi-drivers in the world, hardly ever having to consult a map, but also that their brains have actually changed. The part of the brain called the hippocampus, which is where we do spatial reasoning (among a wide variety of other things), is typically much larger in cabbies than in the average person (p 38).

The import of this to our spiritual lives is large. If left unchecked, we could become enslaved to our bodies or our emotions and obey its sensual desires or romantic feelings. Since the “information pathways” are carved out, and sometimes very deeply, we can get “stuck in a rut” and find it near impossible to break bad habits. A decision to cheat on a test could eventually lead to a decision to cheat on my taxes or on my wife. A repeated response of irritation or frustration toward caring for my grandson could gradually cultivate in me a heart of bitterness and resentment toward all of life, if left unattended. The slope is slippery! If our “inner self” is not guarded, guided, and governed by God’s Spirit through God’s Word, then we will not mature as a believer in Christ. Conversely, a choice to be honest or patient or trustworthy does lead to habits of virtue and Christ-honoring behavior. Just as going to the gym develops our physical muscles, so too exercising our moral muscles eventually gives us a “second nature” and we gradually become virtuous people who glorify God. Over time, the awkward and cumbersome experience of acting right can become natural to us.

This is life in the Spirit!

Spread the word (please & thank you)
2013-08-07
Previous Post: Don’t Let Your Analysis Get in the Way of Your Synthesis!
Next Post: The Practical Side of Worship