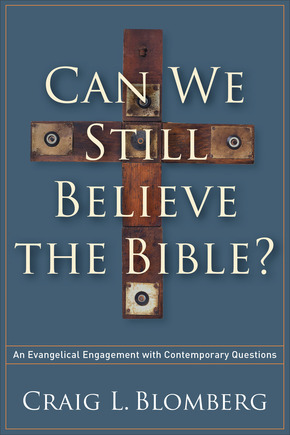 Can We Still Believe the Bible?. It’s a tour de force that tackles topics such as the trustworthiness of our copies of the Bible instead of original manuscripts, canon of Scripture (both Old and New), King James Version controversies, inerrancy, historicity and genre, and miracles recorded in Scripture. Every page is a gold mind of information that charitably and fairly reasons with clarity and with grace. At the same time, Blomberg pulls no punches when dealing with the likes of those outside the camp of Christianity (think Bart Ehrman) and even those within (think Norm Geisler, John MacArthur). A host of additional references in the endnotes (which I always read) show ample engagement with the broader scholarly literature that serves readers well for doing further research.

One such endnote I believe warrants highlighting, despite its length. For those who do not know, Craig Blomberg has served on the Committee for Bible Translation (CBT) for the New International Version (NIV) and, naturally, he is a champion for it. Nevertheless, he equally champions other translations based upon the purpose of the reader (familiarity, study, et al.).

On the contrary, Wayne Grudem (and others) insists that the ESV is the best, most accurate translation available today, touting its superior translation philosophy as “essentially literal.” Specifically, when it comes to gender-inclusive language translations, it is argued, they are not responsible, confuse the meaning of the text, and encourages or even “empowers” evangelical egalitarians (p. 113).

Blomberg responds with some important points that should not go unnoticed. I’ll not comment after since the quote speaks for itself. He states

Grudem (“English Standard Version,” 72) is particularly candid about this. Despite a leading complementarian, Scott Baldwin, having argued for “assume authority” as an appropriate translation of authentein in 1 Timothy 2:12, despite John Calvin having supported this rendering as well, despite the KJV having used “usurp authority,” Grudem’s bottom line is that egalitarians could too easily use this translation to further their agenda, which he simply can’t abide. Why does he not resort to the approach he insists on others using with gender-inclusive language—simply explaining the true meaning to those who might misunderstand it? The depth of Grudem’s passion to fight evangelical egalitarianism is clear when he writes,

I think the NIV committee failed to appreciate that evangelical feminists who want to become pastors are not going to take “assume authority” in a positive sense at all. They will uniformly take it to prohibit wrongful “self-assumed authority” and then say they are not “assuming authority” on their own but just accepting it from the church. Consequently, 1 Timothy 2:12 in the NIV has become useless in the debate over women’s roles in the church. In any church that adopts the 2011 NIV, no one will be able to answer their argument using this English Bible. (“English Standard Version,” 72)

This last sentences seems completely unfounded. For readers who don’t understand gender-exclusive language intended to refer to both men and women, Grudem recommends adding a simple explanation of how “he” or “man” can refer to both men and women. The same thing could be done for 1 Timothy 2:12, with something like “Scholars are divided on the meaning of authentein in this passage. “92 percent of the ESV is the unrevised RSV.” (p 92)

Some think it refers only to the exercise of some wrongful kind of authority; others, to a positive use of authority as well.” The CBT chose this particularly happy translation because one can “assume authority” both in a wrong way and when it is not one’s to assume at all. Neither complementarian nor egalitarian need feel excluded, and supporters of either view will need to take all the Bible’s teaching into account anyway as they make their decisions. More important, to censure a certain translation because it doesn’t, in one’s opinion, make it easy to exclude a view one personally disagrees with, even though other equally gifted, godly, and academically qualified evangelicals hold the view, is to go far beyond the purview of any translator, especially someone who supports essentially literal translations!