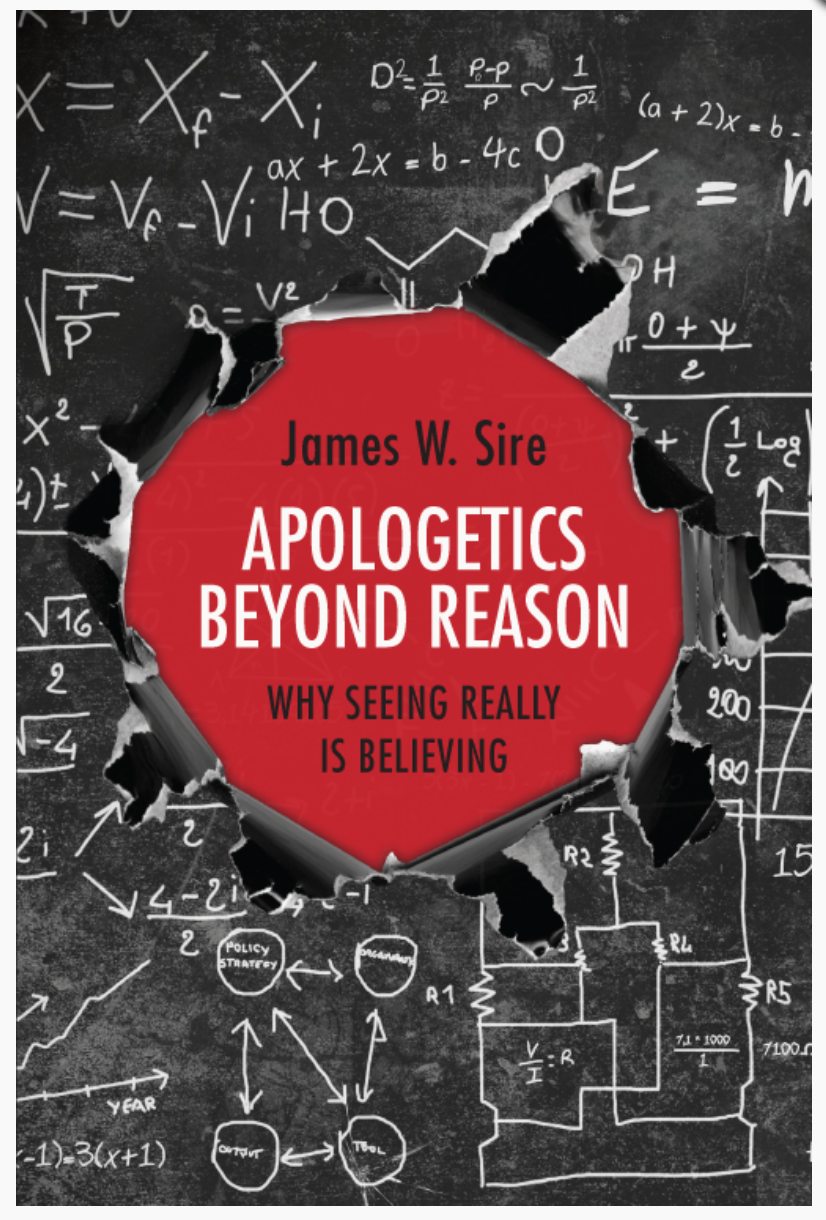 Apologetics Beyond Reason ventures into nontraditional territory when it comes to classic apologetics. I’m familiar with Sire’s other work, have benefitted greatly from it, so this title grabbed my attention. Coming from the analytic tradition, I was intrigued how one might get “beyond reason” without also utilizing reason when defending the Christian faith. What I found was a robust apologetic method and one that will likely resonate more with a [post] post-modern/existential culture than more traditional approaches. While apologetic models typically fall within rational or evidential spaces, Sire’s presuppositional touch (see my post Apologetic Taxonomy), coupled with his push toward the “intuitive”, will add valuable insights in the toolbox of Christian apologists. This book deserves a wide and careful read.

Chapter 1
After laying out classic methods of apologists, Sire notes that with the exception of C.S. Lewis and G.K. Chesterton, apologists of the last few generations rely upon the ability of human reason to reach true conclusions, which Sire labels as rational apologetics. As a committed presuppositionalist, Sire shows the limitations of the rational apologetic method. Although there is some value in this method, it falls short in utilizing the full scope of the human experience. Sire readily admits that given the “fallenness and finitude” of all apologists, it is God who must inspire the apologetic task, which is “to lay before the watching world such a winsome embodiment of the Christian faith that for any and all who are willing to observe there will be an intellectually and emotional credible witness to its fundamental truth” (p 22).

Chapter 2
The topic of this chapter (and the book’s theme) is that “there is nothing in the universe that does not finally point to the existence of God as Father, Son, and Holy Spirit” (p 24). At first this seems not only grandiose but impossible to substantiate in one book. But Sire is aware of this “audacious” claim and instead offers the manageable task of employing “signals of transcendence” (using Peter Berger’s well-known expression in A Rumor of Angels). These “God adumbrations” serve to provide hints of God’s presence along the path of our ordinary, everyday lives. More on this later.

After expanding on his commitment to presuppositionalism showing that human reason cannot ground itself, Sire illustrates how great literature is most often constructed upon a foundation of philosophical and theological commitments. Making use of Stanislaw Lem’s comic epic The Cyberiad, Sire notes that “if we — as finite human beings, let alone fallen ones — are to know who we really are, we will have to be told” (p 35). As children of the Enlightenment, we were “gifted” not only with autonomous human reasoning but also with doubt. Any assurances we claim or any truth we glean about ourselves is quickly brought into question, as Descartes has shown (Meditations). Our certitude is grounded largely in the subjective. Ironically, the Enlightenment brings us into a great “Darkening” by insisting that “autonomous human reason tells us human reason is autonomous” (pp 38). So the circle goes.

But there is good news. As Sire shows, human reasoning is not the only place to begin the quest for certainty. There is also “direct perception” or “intuitive seeing” that is neither against reason nor unreasonable. Instead it is “beyond reason” (p 39). That is the quest of the next chapter.

Chapter 3
At first read, this chapter highlights some strengths of epistemology. But Sire shows that any well-grounded presuppositionalist would be merely begging the question if beginning with epistemology to justify beliefs. Instead he insists (and I would heartily agree) that “a properly Christian epistemology is not justified by an epistemology but by an ontology,” which is the really Real, who, for the Christian, is the Triune God (p 45). Contrary to Descartes and the Enlightenment we do not begin with the thinker nor with the knower but with being; with what (or rather Who) there is to know.

Chapter 4
Signals of transcendence found in literature and the secondary worlds that writers create is where Sire shows his masterful touch. I found this chapter especially intriguing as he shows that writers’ poetic power and the emotion they evoke in readers are all gifts from and grounded in God. Moreover, the secondary world (the subjective world as it is imagined in story) created by great writers — such as Dickinson, Carroll, Steinbeck, Tolkien, or Woolf — connects readers to the Primary World (the objective world as it is understood by writers). Even for those writers who do not intend to, this connection points to the existence of God and his creative power. Literature “admits us to experiences other than our own” (C.S. Lewis) and the skilled Christian reader “brings to bear the Christian take on reality, consigns the literary work to its proper place as an artwork and as an embodiment of a view of reality and participates aesthetically within the worldview by sensing what it feels like to view reality from that point of view” (p 72).

Chapter 5
This chapter puts meat onto the bones of the previous one by giving examples from literature. Sire seeks to illustrate that the connection made between writer and reader is similar to the connection made between Creator and created; the immaterial and the material; the imagined and the real; the abstract and the concrete. Sadly, great writers can misinterpret those signals of transcendence and take readers down a path that distorts reality or even contradicts it. Yet the fact that there are these kinds of relationships in literature is itself a signal of transcendence and a pointer, if you will, in the direction of a world beyond the material, tangible, touchable. Great writers — whether or not Christian — are signs of great humans made after a great Creator.

Sire concludes this chapter lamenting that many Christian apologists have paid too much attention to reason and evidence and too little attention to the use of intuition. After the spirit of Kreeft and Tocelli (Handbook of Christian Apologetics), it is not irrational to claim both that “God exists” and “you either see this or you don’t.” Whether recognizing the aesthetic value in great music or in great literature, everyone is capable of making use of an inward power or faculty that runs deeper than cognition and is “beyond reason.” Calvin’s sensus divinitatus (a sense of divinity implanted in all) is the one faculty in which every human shares that makes this possible.

Chapter 6
This chapter turned out to be one of the highlights of the book as Sire put his own creative writing on display. With a short fictional story he offers an intriguing and captivating page-turner. I won’t unpack the details of the story but will mention that the key person in it inches his way from a cold Deism toward a Christian theism by visiting several art museums throughout Europe and reading poetry. What is more, it is not out of images of beauty and symmetry so often associated with art and poetry that Sire’s character makes his trek. Instead it is in and through the dark and asymmetrical pains of life that the person moves toward God, which the art and poetry portray. And so, as his thesis goes, Sire shows that even in pain and suffering, even in evil and darkness, we find signals of transcendence because everything points to God.

Chapter 7
This final chapter highlights what are, for Sire, two supreme examples of God’s revelation of himself: Jesus Christ and Scripture. Often apologists use the uniqueness of the resurrection as historical evidence that the Bible is true or when seeking to show that the Gospel is true. While these are reasonable inferences, Sire argues that they miss the point. Instead the resurrection and the phenomenon of Scripture are signals of transcendence, pointing beyond themselves to a Person. Jesus is “more amazing than his resurrection.” In fact, “Jesus is Reality” and all else points to him (p 131). Consequently, in Jesus we find the enigmas of life and our deepest problems solved. Moreover, rather than defend the Bible as the Word of God (to which Sire would readily ascend), he argues that Scripture is a “beacon” pointing to the reality of Jesus as God Incarnate. Unless and until we get that, then we lessen the worth, value, and intent of what Scripture purposes; namely, to show us God.

While reading this last chapter (and the book throughout) I could not help but recall an old, somewhat popular Chinese proverb that goes something like this: “Only a fool continues looking at the finger that points to the moon.” That is, we must not stay fixed on the sign and miss the reality to which it points. The historical evidence for the resurrection, the reliability of the biblical documents, the arguments for God’s existence, the supposed irreducible complexity showing intelligence built into the biological world, the cosmological science showing a beginning of the universe, all of these are shadowy means and serve only as signs that point to the one true Reality of God in Christ.

Sire admits that any apologetic endeavor includes the use of human reason. He says as much in the Afterword. Yet he would add that it is not limited to reason. Apologetics is beyond reason involving the human heart to intuit the things of God. You either see this, or you don’t.

1 thought on “Apologetics Beyond Reason: A Summary Review”