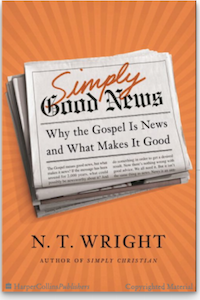 Simply Good News is simply a good read as it brings into focus aspects of the gospel that have been out of focus in many traditional evangelical circles. The subject has not changed, but rather the depth of field has. In some ways there is nothing new here. What is new, however, is the careful distinction Wright places on good news versus good advice. Good advice is “an option you might like to take up if you feel so inclined…For some, it’s a new kind of spirituality: here is a Jesus-focused interior life for those who want that kind of thing. For others, it’s a new way of living: here is a Jesus-based morality you…might like to follow. For others again, it’s about taking out an option on your future — a kind of retirement plan, except that the retirement in question takes place after your death” (p 19). None of these are entirely wrong, says Wright, but they miss the main point.

Instead, for the gospel message to be good news it must contain 4 elements: “(1) an announcement of an event that has happened; (2) a larger context, a backstory, within which this makes sense; (3) a sudden unveiling of the new future that lies ahead; and (4) a transformation of the present moment, sitting between the event that has happened and the further event that therefore will happen” (p 23). After spending considerable time unpacking the importance of (2) above, the remainder of the book sharpens its sights on (1), (3), and (4). Wright states:

The announcement of what has happened — Jesus’s death and resurrection as the fulfillment of the ancient biblical promises and divine purposes — is matched by the assurance of what will happen in the future, when God is “all in all,” transforming the whole of creation and raising his people into new, transformed, bodily life. And held within those two poles, they learn that the life they now live in the present is to be transformed by its relation to the past and the future. Because Jesus died and was raised, those who belong to him have died and been raised and they must live accordingly. Because God is going to remake the whole world and raise his people from the dead, they must live in the present in accordance with that ultimate promised destiny. Everything will be different.

What struck me as novel here is the sequence. Rather than lay out the good news as the past, the present, and then the future, Wright insists throughout the book that Scripture focuses on the past, the future, and then the present. Instead of something like: (1) Jesus died for you and rose again; (2) you must now submit to that truth in faith and repentance; (3) and then someday after you die, you will go to heaven, Wright focuses upon the cross (the past event that offers forgiveness for sins), the resurrection (the guarantee of future life with Christ), and only then does that make a difference in how we live our lives in the present.

As I think of the various ways in which the good news is presented in the New Testament, I have to agree. Embracing both the past event of our debt paid (the cross) and the hope of our future life in eternity (the resurrection) naturally results in a transformed life here and now. This sequence foregrounds both the past and the future, and backgrounds the present in such a way that a call for human response to the gospel is the outcome of the good news.

This strikes me as not insignificant. Is the sequence important? Does the sequence in which we present the good news to others suggest where we place the emphasis? What do you think?