I’m only through the first three chapters of 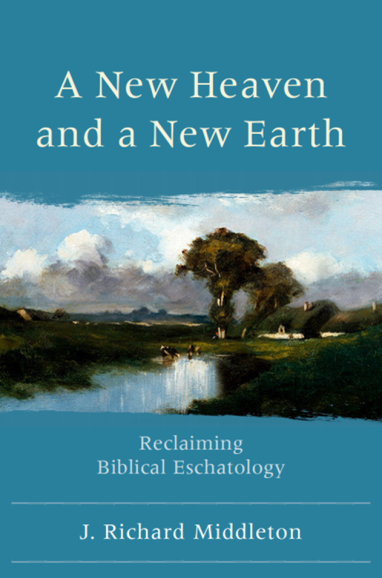 A New Heaven and a New Earth: Reclaiming Biblical Eschatology by J. Richard Middleton but am hooked. Since eschatology (those teachings in the Bible around the “end times”) is one of my weakest areas, and since I’ve been dissatisfied with the pre-tribulation, premillennial, left behind-ish dispensational construct that remains the predominant stance of the North American Christian Church, I thought it time to delve into this topic and straighten myself out … a bit. I was first exposed to a new way of thinking years ago after reading N. T. Wright’s booklet “New Heavens, New Earth: The Biblical Picture of the Christian Hope” (further spelled out in his Surprised by Hope). Though I’ve hardly moved past a tentative foundation, I’m slowly reconstructing my own position on how, when, and where the “new heavens and new earth” will manifest. A New Heaven and a New Earth, so it seems, will be a key source that will help me in this way.

So far I’m finding Middleton’s position to be biblically robust, reasonably argued, and hermeneutically responsible. Here are a few quotes that grabbed my attention and set the stage for my reconstruction project. I trust they will whet readers’ appetite.

The picture of the world as a cosmic sanctuary or temple is actually a very common idea in the ancient Near East and is assumed throughout the Old Testament. It surfaces in Psalm 148…It is also the vision behind Isaiah 66….In the book of Exodus, when the building of the tabernacle was finished (40:34-35), we are told that it was filled with the Glory-presence of God (what later Jewish writers would call the “Shekinah”).

If I hold at bay my traditional hermeneutical framework and read the biblical texts prima facie, Middleton makes some rather bold statements that intrigue me. For instance,

The climax of the biblical story, which many have called the “eternal state,” is fundamentally this-worldly.

When we attend to the basic thrust and movement of the biblical plot, it becomes abundantly clear that eschatological redemption consists in nothing other than the renewal of human cultural life on earth. The important point here is that the idea of “heaven” as the eternal hope of the righteous has no structural place in the story. It is simply irrelevant and extraneous to the plot. Heaven was never part of God’s purposes for humanity in the beginning of the story and has no intrinsic role as the final destiny of human salvation.

Indeed, there is not one single reference in the entire biblical canon (Old and New Testaments) to heaven as the eternal destiny of the believer. Although this idea has a vastly important role in popular Christian imagination…, not once does Scripture itself actually say that the righteous will live forever in heaven.

Lest the reader mount their conservative high horse crying “liberal,” Middleton goes on to say “My point here is not to deny the reality of heaven” (p 72). His point is that the term “heaven” is not the final geographical goal of believers. Instead “heaven” consists of God’s consummated will for the renewed earth at Christ’s reveal (Note: I did not say “return” as that suggests he’s gone and not present now. Yet another misnomer, since an omni-present being cannot be spatially absent.).

I know this post is simply a teaser and is hardly satisfying for some (most?). I only wish to get the word out that there is a huge change on the eschatological horizon for God’s people to think differently and, in my opinion more biblically, about end times.

Check out Middleton’s blog to learn much more.

Spread the word (please & thank you)
2015-02-24
Previous Post: Simply Good News: Reading Wright…again
Next Post: To Love or Not to Love