“What is man, that thou art mindful of him?” 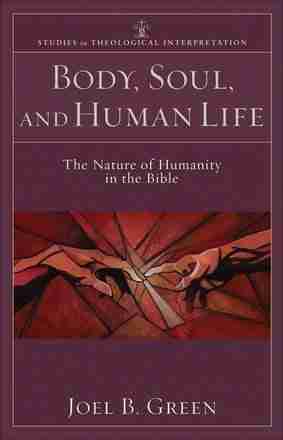 Body, Soul, and Human Life: The Nature of Humanity in the Bible by Joel B. Green. Utilizing philosophical categories, scientific findings from neuroscience, theological savvy, and a keen exegesis of the relevant biblical data, Green argues that humans are not, after all, a composite made up of parts (body, soul, spirit / body, soul / material, immaterial), each with a distinct ontological status or each falling into a distinct parent category. Instead, he sets forth a case for a physicalist anthropology that is thoroughly Christian and a worthy contender to the most widely held view known as dualism (namely, that humans are comprised of two distinct parts, a body and a soul).

After reading John W. Cooper’s Body, Soul, and Life Everlasting: Biblical Anthropology and the Monism-Dualism Debate and more recently J. P. Moreland’s The Soul: How We Know It’s Real and Why It Matters (see my comments), Green’s work offers significant challenges to my views causing me to rethink some commitments that I hold toward holistic dualism. Encompassing the physical and non-physical aspects of humanity without committing to the traditional concept of a “soul” Green puts forth a nuanced version of “monism” or Christian physicalism. To be very clear, Green does not advance a reductionistic view of humanity that so often is portrayed by materialists who charge that all aspects of human experience and existence are merely and only a composite of synaptic firings, neuron engagements, or brain states. I’m finding his view to be quite robust and it deserves serious consideration.

His thesis is essentially that, rather than being an immaterial soul inside a material body, humans are an integrated being made up of one substance (hence “monism”). A human does not have a soul; a human is a soul. The one cannot and should not be extracted from the other. As I understand, it would appear Green aligns most closely with Aristotelian metaphysics rather than with the strict dualism of Plato. In step with the integrative construct (widely employed by Aristotle), he demonstrates that although “the biblical materials and the natural sciences [do not] paint entirely with the same brush in their portraits of the human person,” (p 71) the respective disciplines of science and Scripture do converge to tell the same stories about the nature of humanity.

Needless to say the impact and import of this approach is far-reaching affecting the Christian’s view of salvation, mission, and the future restoration of all things. All biological life shares in the same quality of being which is dependent upon the Creator and yet this dependency is the grounding upon which “relationality” emerges for humanity. In fact, the “significance of human life is tied to dependence upon God” (p 67). And yet, as the Christian story goes, there is a sickness that has infected our ability to hold in right relation our dependence upon God and embrace our full humanity. On the implications of a standard dualism and regarding the sickness known as sin Green states:

“Sin” is a multivalent term that points to the myriad ways in which humans — individually, collectively, and systematically — neglect, deny, and refuse simply to be human — that is, to embrace and live out their vocation as creatures made in the image of God. Accordingly, a Christian conception of human transformation does not allow the categorization of either the person or his or her salvation into “parts,” as though inner and outer life could be separated. Angst in recent decades over how to prioritize ministries of “evangelism” and “social witness” is simply wrongheaded, therefore, since the gospel, the “evangel” of “evangelism,” cannot but concern itself with human need in all its aspects. Only an erroneous body-soul dualism could allow — indeed, require — “ministry” to become segregated by its relative concern for “spiritual” versus “material” matters. Nor does a Christian conception of human transformation allow us to think of the restoration of individuals, as it were, one at a time, but pushes our categories always to account for the human community and, beyond humanity, the cosmos. Persons are not saved in isolation from the world around them.

This video of Joel Green presenting his views ably captures key aspects of his position. It’s well worth your time.

Spread the word (please & thank you)
2015-04-25
Previous Post: A Potshot at a Podcast around “Does God Exist?”
Next Post: The Correlates of Change: On Conversion and Worldview Formation