This post addresses important questions not typically taken into account by a more traditional view of divorce and remarriage and challenges that view where necessary. A brief account of some key biblical passages will also be addressed in an effort to show a more balanced, nuanced view of marriage, divorce, and remarriage. Caveat: These are my thoughts and my findings, so readers are encouraged to “see for themselves” and not take this as the last word on the issues involved. I only wish to provoke more thoughtful thinking by those committed to Holy Writ.

Why Has Remarriage Traditionally Been Understood As Adultery?
Typically, prohibition against remarriage rests on two main arguments:

It is important at the outset to define “marriage” and “adultery.” Marriage, at minimum, is a bilateral covenant; a contract or agreement between two persons to uphold their end of the covenant. It entails three bonds or unions between a man and a woman.

Does “cleave” (NASB) or “united” (NIV) Imply Permanence?
Some (e.g., J. Carl Laney, The Divorce Myth, 1981 and Paul E. Steele and Charles C. Ryrie, Meant to Last, 1983) suggest this term, as used in the OT, implies permanence. However, consider the following:

What is lost in a marriage is not individuality but independence. Members of a Christian marriage covenant are two distinct individuals that make up a team or unit who have chosen to live dependently upon each other under the headship of Jesus Christ.

What About the “Certificate of Divorce” in Deuteronomy 24:1-4?
This passage is explaining an aspect of stealing. Here Moses is charging that the man who has stolen the woman’s dignity by illegitimately divorcing her does not have the right to have her back. This passage does not say:

The divorce legislation of Deut. 24:1-4 falls within a larger pericope beginning at 23:15 and ending at 24:7, in which we find Moses’ explication on the 8th commandment (namely, prohibition against stealing). This is not to say that marriage partners are mere property or chattel, but more in the spirit of “belonging” (e.g., Song of Songs 2:16). It is possible, therefore, that 24:1-4 is explaining an aspect of stealing whereby the man who has stolen the woman’s dignity by illegitimately divorcing her does not have the right to have her back.

Deut. 24:4 could read “since she has been made to declare herself defiled.” Note the reflexive passive form of the Hebrew Hothpa’el, possibly meaning that the divorce legislation is a provision for the woman to remarry and she is not responsible for her own defilement. Naturally, the fact that the verb “defiled” is a hapax legomenon (one-time occurrence) doesn’t help with any type of dogmatic conclusion, but the Hothpa’el form with the once-only “defiled” is strange. Could it be that Moses went out of his way to make this verb unusual?

Practically speaking, although the stigma of defilement is upon the woman, she may very well be the innocent party in an unjustifiable divorce by the hardness of the man (much in the way that the stigma of a raped woman is more a reflection upon the rapist rather than upon her). Hence, the stigma of defilement (stolen dignity?) in Deut. 24:1-4 does not carry with it the burden of moral guilt upon the woman nor her subsequent remarriage. Therefore, the legislation of divorce in Deut. 24:1-4 could be seen as a provision for the innocent woman, wrongly divorced by her first husband, to remarry (This comports with 1 Cor. 7:15ff.).

Is There a Legitimate Biblical Example of Divorce?
In Ezra 9-10 we find a kind of spiritual apostasy of God’s Remnant who had intermarried with their pagan neighbors. Ezra, taking Shecaniah’s counsel, put all of Israel under oath to do “God’s will” (10:11) and separate themselves from their foreign (spiritually, that is) wives; the high-level principle being that intentional interfaith marriages compromise the believer’s walk and invites disaster into the kingdom of God (cf., perhaps 2 Cor. 6:14 for the corresponding NT application). Scripture does have at least one example that presents divorce as an act of obedience. This seriously complicates the equation of the doctrine of divorce and remarriage. In this passage we find that divorce is the morally proper corrective for spiritual apostasy. However, whether this is a precedent to follow is not clear and application of Ezra 9-10 is tenuous at best.

Jer. 3:1-10 records a different kind of adultery and divorce. God divorces “faithless Israel” due to her repeated spiritual idolatries, which is tantamount to moral adultery. Hence, Scripture speaks of adultery in a variety of ways: moral, physical, as well as sexual. Obviously, there was no sexual adultery between the Northern Kingdom and its “foreign gods” (v. 13). Rather there was a moral adultery involved, which invoked God’s discipline of divorce (v. 8). A spouse can be an adulterer(ess) without being physical with another (see, Mt. 5:28). While Ezra 9-10 (see above) is an instance of divorce as a form of obedience, Jeremiah demonstrates divorce as a form of discipline.

Is Paul’s Teaching Consistent with Jesus’ Teaching? Comparing Mt. 5:31-32 with 1 Cor. 7:10-16
When counseling the Corinthian Church, Paul speaks of two kinds of divorce: 1) Christian couples, i.e., divorce between two believers (1 Cor. 7:10-11), and 2) mixed marriages, i.e., divorce between a believer and unbeliever (1 Cor. 7:12-16). Although Paul does not explicitly say that he is speaking about Christian couples in the first instance (7:10-11), it seems apparent that he has Christian couples in mind. First, he refers to Jesus’ teaching (“not I, but the Lord,” v. 10), presumably referring to the Sermon (Mt. 5:31-32). If, therefore, some of Paul’s teaching on divorce refers to the teaching of Jesus (comp., 1 Cor. 7:10-11 with Mt. 5:31-32), and the Sermon (Mt. 5-7) is primarily referring to those who are pursuing kingdom righteousness (= believers), then the divorce statement in both Mt. 5:31-32 and 1 Cor. 7:10-11 is exclusively referring to Christian couples. In the second instance (divorce between mixed marriages), Paul is careful to say that his instructions come from himself, not the Lord. That is, the teaching on divorce in the case of mixed couples has not been expounded by Jesus until Paul.

If it is the case that Jesus’ teaching in Mt. 5:32 is addressed exclusively to Christian couples (and this comports with Paul’s teaching in 1 Cor. 7:10, 11), then the adulterous situation Jesus refers to in remarriage does not apply to a divorce born out of a mixed marriage. In Mt. 5:31-32 the prohibition to remarry may very well be given to the man who was presumably guilty for illegitimately divorcing his wife.

Moreover, it is men whom Jesus condemns for their flippant attitude toward the marriage covenant in Mt. 19:8, 9 (note the masculine pronouns throughout). This is also true in Malachi 2:13-16 where the famous “I hate divorce” statement lives. Does God hate all divorce or the the kind being referred to in Malachi where men were notoriously unfaithful to their original wives by divorcing them. In addition, there is a variant reading in Malachi 2:16. It could read “For he [the Israelite husband] has hated, divorced, says the LORD God of Israel, and covered his garment with injustice.” The verb “hate” in the Hebrew is not first person (“I hate”), but third person (“he hates;” thus especially the English Standard Version).

“Causes her to become an adulterous” (NIV) does not mean the woman is literally an adulteress, but that the improper grounds of the divorce has caused the woman to be stigmatized. In essence, the woman has been framed by the husband. Yet, the intent of Deut. 24:1-4 is to remove the moral stigma of the divorced woman and emphasize the protection of the innocent wife, whereas Mt. 5:31-32 emphasizes the culpability of the divorcing husband.

If divorce occurs between two believers, Jesus prohibits remarriage of the offending party since that is an adulterous situation. However, neither Jesus nor Paul explicitly say how long the believing divorced spouse is to remain unmarried who is illegitimately divorced. Presuming it is an indefinite period of time (i.e., life-long) is going beyond the biblical text. So too, it is equally presumptuous to make it merely a matter of weeks or even months before the divorced believer is free to remarry. Nevertheless, the timing of remarriage is simply not addressed by Jesus nor Paul.

Additional Questions for Mt. 5:32b
What exactly breaks the covenant relationship between two people? Is it the remarriage or the unrepentant heart of the unfaithful partner? Isn’t it true that the “immorality only occurs because the first wife has been unjustly divorced?” (Luck, Divorce and Remarriage, p146, first edition).

If remarriage by the faithful, innocent spouse adulterizes the original unfaithful spouse, where is the blame laid? Apparently, according to traditional teaching, upon the one who remarries. Why? The unfaithful spouse is where the offense is, and hence where the guilt belongs. Why must such a burden be put upon the faithful, innocent spouse when he/she desires to remarry?

If the period of time to wait and remarry is not life-long, how long should the innocent divorcee from a mixed marriage remain unmarried?

Summary & Possible Implications
How long a believing, divorced spouse is to remain unmarried is not addressed by Jesus nor Paul. To presume, in a maneuver to prohibit instances of remarriage, it is an indefinite period of time is going beyond the explicit biblical texts. If the period of time for the innocent, Christian divorcee is not life-long, then necessarily he/she is free to remarry. I suspect this is the “freedom” or “peace” Paul speaks to in 1 Cor. 7:15, 16. The believing spouse who was illegitimately divorced is free not only from the former marriage bond, but free to secure another. Finally, the charge of adultery cannot obtain unless there is some act of moral failure or unfaithfulness. Therefore, it is not the remarriage that constitutes adultery, but the illegitimate breaking of a covenant relationship. It is the person who breaks faith who becomes the adulterer(ess) (e.g., Jer. 3:1-10).

If a divorce is born out of a mixed marriage and was initiated and consummated by the unbelieving spouse, the believing spouse is free from any covenant obligations to the first marriage and, therefore, free to remarry (1 Cor. 7:15).

If it is the case that Jesus’ teaching in Mt. 5:32 is addressed exclusively to Christian couples, then Mt. 5:31-32 does not apply to an adulterous situation in a mixed marriage.

If the moral, legal, and sexual bonds that make up a covenant relationship between husband and wife are severed by an unbelieving spouse, and divorce ensues, then the believing, innocent party is free to remarry.

Given these conditions, there is no biblical possibility that the remarriage of a believer to another believer constitutes living in an adulterous situation. Since it is true that adultery cannot occur unless there is some act of unfaithfulness, then where is the unfaithfulness when another believer chooses to marry a believing divorcee who was illegitimately put out of their covenant relationship by an unfaithful spouse? 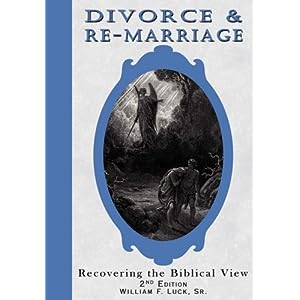 The majority of these findings come from Divorce and Remarriage: Recovering the Biblical View (now updated and re-published), by William F. Luck. For an equally important treatment, see also Divorce and Remarriage in the Bible: The Social and Literary Context, by David Instone-Brewer. Also, sincere appreciation goes to my good friend Louis McBride who not only sat under Bill Luck at Moody Bible Institute, but helped me think deeply about much of this material. More recently, see Emily Hunter McGowin’s “Wayne Grudem on Divorce: The Right Conclusion for the Wrong Reason“.