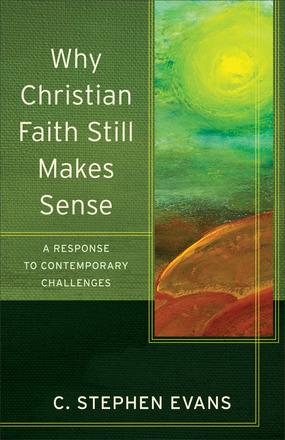 Why Christian Faith Still Makes Sense: A Response to Contemporary Challenges by C. Stephen Evans ably and plainly responds to many of the common myths and misunderstandings around the Christian faith. Whether questioning, doubting, or explicitly denying the basic tenets of Christianity, Evans’s newest would be an excellent read to offer in response to honest inquiry. There is nothing here that is overly academic, though all levels of readership will appreciate the thoughtful tone and cautious style in which the case for Christianity is presented.

One of the biggest stumbling blocks surrounding Christianity is whether evolutionary biology comports with faith. The block that stumbles trips up both believer and nonbeliever alike. Many nonbelievers argue that the supposed design or intended intelligence of the natural order is merely an appearance or projection of order. One need not postulate a Designer, since the “the apparent design in nature is only apparent” (p 45). The universe and everything therein is simply a brute fact. Searching for purpose and meaning outside the raw data is beyond the scope of what can be known. Thus, an Intelligent Agent is, at best, a vain and woeful attempt at wish-fulfillment.

Many believers insist that a commitment to evolutionary biology necessarily nullifies belief in God. The two are mutually exclusive so they argue. The logic goes something like this: “A process that depends on random mutations cannot be guided, and so God cannot have used an evolutionary means to achieve his ends” (p 46). Whereas nonbelievers trip over faith in an Intelligent Designer, believers trip over the evolutionary process. But, Evans shows there is a trail that responsibly leads to clarity in this discussion that continues.

The key to charting a clear path is twofold. One a common sense approach; the other involves the term “random.” First, Evans notes there is nothing in evolutionary theory that requires one to see purpose, design, order, or intelligence in the natural world as illusory. After all, “the evolutionary process itself is one that depends on the laws of nature” (e.g., laws of physics and chemistry). Thus, and ironically perspicuous, “evolution actually shows that the order we experience on the surface of things, so to speak, depends on a still deeper, hidden order” (p 45). While logic (and probability theory) indicates that the known constants and variables in the universe could have been otherwise, the fact that they align in such a way as to give rise to this universe with these conditions does make belief in a “finely-tuned” universe reasonable. Simply because “someone has to win the lottery” where it is logically possible that no Intelligent Agent is behind the supposed order we find, is hardly sufficient reason to be a full-on atheist. Moreover, and to Evans’s point, to insist upon the evolutionary process is to embrace a larger order in the environmental conditions that make evolution possible.

Second, when the term “random” is used in the context of evolutionary biology, a precise meaning is intended. When believers hear the term “random” in the context of evolutionary biology, they often understand it to mean something like anything-whatsoever-and-always-unpredictable-can-happen. All that exists is just a matter of chance. But Evans shows that

when scientists claim that genetic mutations are random, they do not mean that they are uncaused, or even that they are unpredictable from the point of view of biochemistry, but only that the mutations do not happen in response to the adaptational needs of the organism … The sense of “randomness” required for evolutionary theory does not imply that the evolutionary process is outside God’s control (p 46).

“Random” in this sense means there is no known correlation between organisms’ adaptation and their mutation. In fact there is no biological mechanism for determining whether a mutation is beneficial unto survival or detrimental unto extinction; in that sense mutation is “random.” This lack of understanding, however, does not mean that the evolutionary process is unguided. (Incidentally, Evans’s argument is found also in Alvin Plantinga’s penetrating and robust Where the Conflict Really Lies: Science, Religion, & Naturalism, pp 11ff. See my review here).

And so, the block on which some Christians stumble is removed when equivocation is avoided and “random” is understood in the precise sense in which it is intended. Nonbelievers can avoid stumbling over their myopathy insisting there is no order or design in biology, since those mechanisms that require evolutionary theory to work require and depend upon the consistent, orderly operation of larger systems in which organisms thrive.

There is much more to glean from Why Christian Faith Still Makes Sense and it would make a great book for discussion or for personal growth and insight. This book offers compelling proposals and challenges every reader regardless of beliefs. Highly recommended!

1 thought on “Evolution or Faith? Navigating the Discussion”