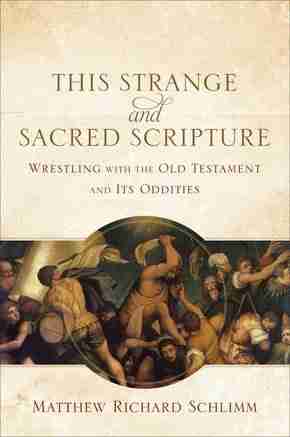 This Strange and Sacred Scripture: Wrestling with the Old Testament and Its Oddities clears the fog and answers common questions and concerns raised by believers struggling to find relevance in the first 39 books of the Bible. There are many valuable lessons here and Schlimm offers some important insights around interpreting the Old Testament in a responsible way.

I wanted to highlight some key points from  chapter 6, “Male and Female God Created Them”. Schlimm begins by insisting all gender-based interpretations be held under the spotlight of Gen 1:26, which affirms the full equality and dignity of all humans, male and female alike. He strongly urges Christians to repent of the sins of biased interpretations that depreciate either gender. One such instance is the supposed gender bias in Genesis 2-3, noting that Eve has gotten a bad rap by the Church and she deserves a better reading. Sadly, some interpreters claim because of Eve (pp 92f):

All of these readings of Genesis 2-3 are nowhere present in the text, but rather are imported into the text. For example, the first bias is easily countered by showing that “Genesis consistently values what comes later, rather than what comes first. It expresses a preference for Able over Cain, Isaac over Ishmael, Jacob over Esau, Rachel over Leah, and Joseph over his older siblings. Eve isn’t an afterthought” (p 92).

The second bias is countered by noting that “the Hebrew word for ‘helper’ (ezer) generally isn’t used to describe slaves, assistants, or even humans….[in fact] it describes God” (pp 92-93; see Ex 18:4, e.g.). And, whether or not Eve ate first is simply irrelevant, since the text never claims Eve was alone but clearly says “she also gave some to her husband, who was with her, and he ate it” (Gen 3:6).

The fourth bias is commonly misunderstood and used repeatedly to claim that male superiority and dominance is God’s prescribed punishment upon Eve for her disobedience in eating the fruit. Yet, Schlimm points out that “it’s important to ask whether the Bible is being more descriptive—talking about negative features of our fallen world—or prescriptive—telling people how things are supposed to be” (p 93). To insist that Gen 3:16 says “Your husband ought to rule over you” is to go beyond the text. Schlimm notes that violent texts in the Old Testament are often lamentable descriptions of the way things are, writing “the surrounding verses describe pain in childbirth, the difficulties of physical labor, and the certainty of death (Gen. 3:15-19). None of these things are good” (pp 93-94). If it is somehow good or commanded by God that the husband is to rule over the wife, then why all the other negative declarations? Thus, it’s a difference of understanding the pronouncement in Gen 3:16 as de jure versus de facto, the latter being the responsible reading.

Most importantly, and borrowing from Ellen F. Davis’s Getting Involved with God (pp 71-72), Schlimm points to the proposal that Song of Songs 7:11 might very well be the beginning of a reversal of the negative outcomes in Gen 3:16. Here’s the quote he offers:

There is one place in the Song that makes it unmistakably clear that the long sad history of asymmetry between man and woman is a thing of the past, and a new paradigm is being established. In Eden, it seems that the woman’s own sexual desire condemned her to subordination: ‘toward your husband will be your desire [t’shuqah], but it is he who will rule over you!’ (Gen. 3:16). But here, after a lengthy exchange of poetic compliments (5:10-7:10), the woman exults: ‘I am for my lover, and toward me is his desire [t’shuqah]!’ (7:11). Because that word t’shuqah is a rare one, occurring only here in the Song and in Genesis (3:16 and 4:7), the line the poet is drawing stands out clearly. This is an intentional echo and a reversal of the sad ending of the idyll in Eden. No longer, the poem declares, are desire and power unequally distributed between woman and man. The woman proclaims a true partnership of unrestrained self-giving and mutual advocacy: “I am for my darling and he is for me’ (6:3, compare 2:16).
(Schlimm, p 94, emphases original)

In all my reading on biblical egalitarianism, I’ve not come across this parallel between Gen 3:16 and SS 7:11. It seems convincing and deserves careful consideration and further study.

Schlimm’s text is especially good and I’m thoroughly enjoying it’s clarity and accessibility. He touches on many of the issues that believers have regarding the Old Testament. Highly recommended!