Ontological Subordination of the Son?

Darren O. Sumner has a very nice contribution to 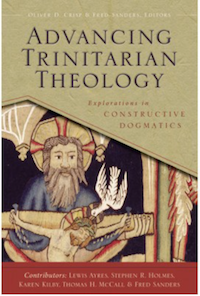 The distinction between ontological and functional subordination finally rests upon a metaphysical division between God’s being and act. As Scott Swain and Michael Allen put it in a recent essay on this topic: “mode of acting follows mode of being (modus agenda sequitur modus essendi).” Therefore the divine being has (by definition) ontological priority over the divine works. God’s triune life ad intra and in eternity precedes and grounds God’s activity ad extra of command and obedience; there is no basis for speaking of “function” or “activity” in the eternal repose of the divine Trinity. In this context, subordination therefore cannot be eternal without also being ontological.

The footnote referencing Swain’s and Allen’s essay “The Obedience of the Eternal Son” states:

Swain and Allen are committed to this ordering as a “guide for dogmatic reasoning” (p. 121), and this forces them to restrict the Son’s obedience to the economy – though it is grounded in his eternal procession: “the obedience of the Son is the economic extension of his eternal generation to a Spirit-enabled, creaturely life of obedience unto death” (p. 117).

Sumner concludes with this powerful statement and much-needed corrective:

The proper model for human existence and human relationships is not to be found in the doctrine of the Trinity but in Christology. Jesus Christ reveals true humanity to us, Jesus Christ is the bridegroom of the church, and Jesus Christ is given to all human creatures as an example of their own obedience and submission to God. Men and women participate in the triune life of God as they are united with Christ in the power of the Holy Spirit, as together they are the “body of Christ” – a body that is in need of him as its head. They are not “heads” and “bodies” of one another. Dogmatically speaking, then, anthropology properly follows Christology and not the doctrine of God. There is no creaturely access to the triune life that does not pass through the person of the Mediator, the one who “did not consider equality with God something to be exploited,” and who demonstrates true humanity in his humility and servitude.