A Solution to the Euthyphro Dilemma?

When in seminary, I wrote a paper offering a solution to the classic Euthyphro Dilemma (also the Divine Command Dilemma; see here). My solution made an appeal to God’s simplicity but did not not make the conceptual linkage that would shore it up as a bona fide resolution. While I believe that I was on the mark in the direction that I went, there were some finely tuned nuances that would have made it better if I had connected the dots between the notions of simplicity, God’s attributes, and the horns of the Dilemma. 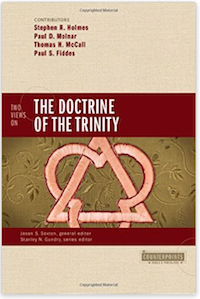 I was delighted to see these connections made by Stephen R. Holmes. I find his  proposal intriguing as he claims that the Dilemma is solved by God’s simplicity. Framing the Dilemma in classical terms, Holmes writes:

Is God good because we define good to mean what God is (which evacuates the term of any transcendental moral content)? Or is God good because God conforms to some external standard of goodness (which asserts the existence of something greater than God)?

Regardless of which side one answers, there is a difficulty with God’s character and being. Holmes offers that God’s simplicity, as “a property of the divine essence,” means there is “no complexity in the divine nature; God is not separable into this bit and that bit” (p 39). Similarly, it’s important to avoid putting God into any kind of class such that “if God is one example of a class of things — say, one merciful thing among many other merciful things — then the class as a whole is larger than God, and so something is greater than God.” And so, “by identifying God’s goodness with God’s essence — divine simplicity — we are able to claim that God’s own life is the transcendental standard of goodness, avoiding both unacceptable consequences” (p 40).

However, when we make claims like “God is good” or “God is just,” we are not saying these are divisions within God’s life, since God is in no way composite. These claims are not a strict logical identity, since if they were, “then saying ‘God is good’ and ‘God is eternal’ leads easily to the conclusion that ‘goodness is eternity,’ which seems nonsense.” Our language and speak about God has limitations, is imprecise, and is, at best, analogical (using Aquinas’ term).

Spread the word (please & thank you)
2015-07-22
Previous Post: Ontological Subordination of the Son?
Next Post: Same-sex Marriage: Bad for the Environment?