More Highlights from Perichoresis and Personhood

Setting the stage for the second chapter “Perichoresis and Christ”, Twombly begins by describing the “genuine advances” in christological development since Chalcedon (pp 48-53). I have to say that those already familiar with Chalcedonian (451 CE) and its import will readily find these few pages a gold mine of Christian history and worth the price of the book, Perichoresis and Personhood: God, Christ, and Salvation in John of Damascus 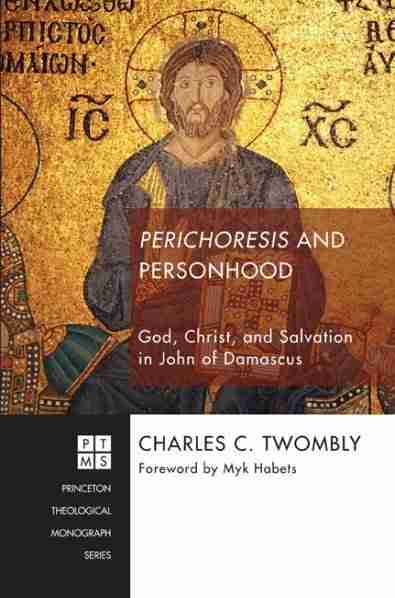 . There is so much in this chapter (all of which deserves a careful reading), but I can only focus on a few major themes that arise from it.

First, Twombly zeroes in on the terms physis (nature; traits of a species) and hypostasis (person; individual instance of a physis) and notes a fine distinction between ousia (being in itself; substance/essence) and physis (a kind or form of being). The result is a taxonomy that moves from general to specific such that an ousia –> physis –> hypostasis. Inductively speaking, all persons (individual instances) share in a nature (traits common to a species) which make up a common substance. Deductively speaking and in Twombly terms,

There is, therefore, a narrowing of range as one moves from being, the most general category, through nature, as the category marking off the peculiar character of a specific species, to hypostaseis or person (better: individual), as the term for specifying a particular manifestation of some species.

There is a common nature, then, a nature with its own “natural” traits, that runs through a species. An individual within that species may have “accidental” traits that underscore its individuality, but it will, at the same time, embody characteristics common to the species as a whole. (pp 59-60)

How this taxonomy bears on the John Damascene’s Christology becomes clear. One conclusion that is unpacked throughout the chapter is the ontological priority of the divine nature over the human nature such that the former “pervades” the latter but not vice versa. Nevertheless, there remains a measure of “reciprocity” between the two natures lest we commit the monophysite error.

Additional terms given clarity of meaning include: nous (mind) that controls psyche (soul), which in turn controls soma (body), yet “without any of these elements being obliterated or suffering essential alteration in the process, so that the Logos may be viewed as embracing all of the human aspects without reducing any of them to insignificance” (pp 69-70).

Of particular interest is the use of science to illustrate the relationship of the hypostatic union of Christ’s two natures by a “union by composition” (pp 72-74). Drawing from the late Israeli scientist and historian Samuel Sambursky, Twombly shows how Aristotelian and later Stoic physics provide a model. For Aristotle a “mixture … lacked a homogeneous character, because the attempt to mix two or more [solid] ingredients apparently resulted in mosaic-like composition” (e.g., wheat and barley). A mixture of liquids presented the opposite problem such that “the weaker of two [liquid] substances is assimilated to the strong and virtually disappears” (a drop of wine in water). On the former model we venture toward the Nestorian error, whereas on the later model we broach the monophysite error in Christology.

Instead the Stoics provided a better example by noting a third type of mixture. Rather than a “mingling” of ingredients (Aristotle’s first type above) or a “fusion” of ingredients (the second type), there is a “total mixture” such that a “complete interpenetration of all the components takes place.”

Any volume of the mixture, down to the smallest parts, is jointly occupied by all the components in the same proportion, each component preserving its own properties under any circumstances, irrespective of the ratio of its share in the mixture” (emphasis his; cf. p 74 for source).

While not ideal, this model of “total mixture” has many elements that align with an orthodox Christology. As John of Damascus insists, while the Trinity may be lacking in analogous heuristics, the Incarnation offers some similarities between what God has done in Christ and this world.

There are many other topics addressed in this chapter that are crucial and continue to have significant influence upon an orthodox Christology. Although I cannot take the time here to rehearse their details, these topics include the relationship of the human will to human nature vis-a-vis human person; whether or not Christ had two wills or one and the corresponding questions around the suffering of God in Gethsemane; how one can be truly human without a human father and the related issue around Mary as “Theotokos”; the dynamic (versus static) interplay between the two natures of Christ as they “dwell within each other without confusion;” the distinction between the act/exercising of a will vis-a-vis the fact/reality of a will.

Perichoresis or “mutual indwelling” is the summary expression that explicates how the two distinct natures of the one Person ‘dance’ in concert while simultaneously “act conjointly, with each nature doing in communion with the other that which is proper to itself” (p 86).

Spread the word (please & thank you)
2015-08-18
Previous Post: Some Highlights from Perichoresis and Personhood
Next Post: Christianity & Religious Diversity: A Review