What Image Within? Our Theological Identity 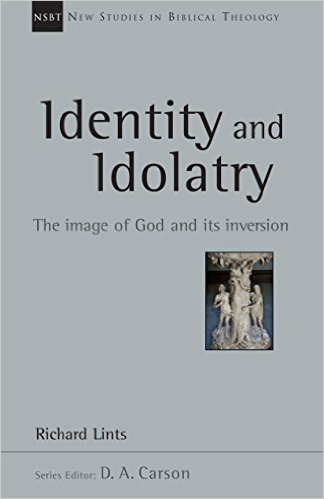 Identity and Idolatry: The Image of God and Its Inversion by Richard Lints. I wanted to capture a few quotes that struck me as helpful in thinking about the imago Dei or the image of God within us. Helpful in the sense that we are forced to think critically, biblically, and theologically about the logical complement to God’s image, namely, idolatry and its deleterious effects. Put differently, if the imago Dei within is not protected and nourished, then an imposter gradually takes its place and becomes not just the product of our hands but tragically we become its slave. The imago Dei morphs to the imago creatio. That which gives life (the imago Dei) becomes that which has no life (imago creatio), powerless to provide the safety and security and significance that all humans long for.

Israel’s creation and worship of the golden calf is prime example (Exodus 32). With theological precision, Lints recounts the monumental effects of this act of disobedience.

The character of idolatry, of creating an image of an alien deity, was the conceptual undoing of the original act of being created in the image of God. Israel’s collective act effected an ironic reversal of the original convenantal arrangement. Rather than illuminating the created order with the reflection of YHWH, Israel now sought their significance and security from the created order. In due course they became like the idol they had created: stiff-necked, hard hearted, with eyes that could not see and ears that could not hear…Worship fashioned the worshipper into an imprint of the object worshipped. Worship of the one true and living God brought life in all its purpose, dignity and security as a consequence. Worship of the false gods refashioned worshippers in the image of the inanimate creation. And for this reason the honouring of the golden calf was the theological turning upside down of the original created order.” (pp 93-94)

Turning to the New Testament we find that upside down image of Adam turned right side up in Christ who is the “inverted idol of God” (p 123). Lints shows us that “the imago Dei attains a unique status in the person of Jesus Christ, not merely as a human but as the perfect image of God” (p 120). Carefully carving out the practical implications of these two competing images for the believer, Lints reasons from 1 Corinthians 15 (also Romans 5) that:

All of humanity bears the image of Adam, the man of dust. In Adam humans inherit death as their just sentence. In the resurrection Christ’s people will bear his image, the man of heaven, and will inherit an imperishable existence. Yet strangely, on this side of paradise God’s people bear both the image of Adam and the image of Christ. These images are not mutually exclusive. This argues that ‘image’ functions not as an ontological description of one’s essence, but as a theological depiction of the divided worship of the human heart. It is the question of one’s theological identity, of where on finds significance and security. (p 123)

Finally, and most importantly for that cherished (dare I say “idolized?”) Westernized, individualized, privatized, customized persona, Lints argues that the biblical and theological data insists upon understanding the imago Dei as a social or relational construct.

The imago Dei is fundamentally a relational term…It draws attention to the way in which the image reflects the original as its primary relation. The image is conceptually like a shadow, ontologically dependent upon the object it reflects. It is the imaging relationship rather than the image itself that is the primary vantage point throughout Scripture. It is perfectly appropriate to talk about the image as an object in its own right, but it is conceptually impoverished if this is the primary discourse we use to think about the image…The inextricably relational character of imaging language across the canon forces us to affirm both the social character of human identity as well as its fundamentally liturgical nature in relationship to God. (p 153)

Placing the individual person within the larger community of God, Lints gives us a Trinitarian take on the “sociality” of the imago Dei.

The divine community (Trinity) is the blueprint of the redeemed ecclesial community, and the Godness of God is what secures the ecclesial community as a redeemed image and by which the original and the image are distinguished. It is God by virtue of his being God who grants significance to the human community and who also redeems or reconciles that community. It is the ontological ‘weight’ of God that serves as the foundational assumption in the redemptive-historical account of humans as created, redeemed or consummated images. It is not any sociality that defines the human person but a sociality whose telos is found in the permanence of God — in his very Godness. (p 154)

This is an outstanding read and I heartily recommend it to you. Rather than treating various aspects of human nature as so many other theological anthropologies do (body, soul, spirit, mind, emotions, will, et al.), this is a thorough treatment of human identity from the angles of systematic and biblical theology. It’s about who we are versus what we are.

Spread the word (please & thank you)
2015-10-28
Previous Post: Marriage, Human Sexuality, and the Body
Next Post: Moving Beyond the Text to Apply the Text