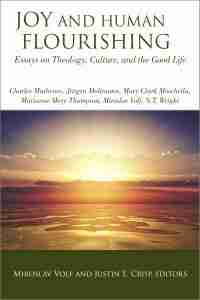 Joy and Human Flourishing: Essays on Theology, Culture, and the Good Life contains essays by Jürgen Moltmann, N. T. Wright, Marianne Meye Thompson, Mary Clark Moschella, Charles Mathewes, and Miroslav Volf. It ties joy with other biblical themes such as ecclesiology, happiness, pastoral counseling, creation, and, of course, suffering. The following nexus shows how some of the contributers understood the relationship of joy in light of suffering, all of which might prove helpful as a framework toward a full theology of joy. I offering some highlights from each.

We don’t accuse God because there is suffering in the world. Rather, we protest in the name of God against suffering and those who cause it….Joy is greater than pain. Why? The answer is simple: because whereas in pain we want our suffering to disappear, in joy we want the things that make us so happy to endure. (pp 14-15)

Paul’s joy [as noted in Philippians] , then, is a joy notwithstanding the circumstances of his imprisonment and affliction, because he has faith that he is sharing in the sufferings of his Lord and hope that we will share in Christ’s resurrection…Paul’s joy is occasioned by his participation in the death and resurrection of Jesus. His conviction that he is joined to Christ in his resurrection, converge to give him joy in his present dismal circumstances. In that sense, joy notwithstanding is indeed a joy because of, that is, joy because Paul is joined precisely in his suffering to the Lord Jesus Christ. (pp 29-30)

Wright: Joy because of suffering

As in Phil. 3:11, so in Rom. 8:17-30, which leads to the greatest outburst of joy anywhere in the New Testament (8:31-39). The suffering of the present time is an indication that the new world and the old are chafing together, and that the followers of Jesus are caught between the two. Paul transposes this into the cosmic context in Rom. 8:18-25, interpreting the groaning of all creation as the birth pangs of the new age. This results not in joy despite suffering, but in joy because of suffering–not in the some masochistic sense…, but because Paul insists on seeing the suffering in terms of the crucifixion, resurrection, and the ascended lordship of Jesus. (p 55)

Moltmann reminds us that God’s abundance is revealed in the imagination and courage to see the world, not just as it is–full of injustice–but as it could be, transformed.

Spread the word (please & thank you)
2015-11-17
Previous Post: Moving Beyond the Text to Apply the Text
Next Post: Highlights from Delighting in the Trinity