What Christians Ought to Believe 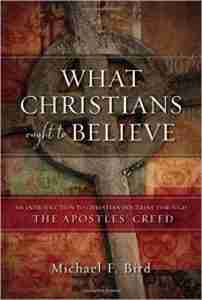 I’m reading through Michael Bird’s What Christians Ought to Believe: An Introduction to Christian Doctrine Through the Apostles’ Creed and finding it an outstanding resource for basic Christian doctrine. For those not familiar with Bird, he is solidly grounded (and educated …. [wink]) in Christian origins and New Testament theology, which makes him eminently qualified to write a book on the most cherished Apostles’ Creed.

One of the issues raised at the outset is the I-don’t-need-no-creed-coz-I-got-the-Bible attitude. He convincingly argues “creeds are biblical,” since the Bible itself contains creeds (Deut 6:4-5; Mk. 12:29; 1 Cor. 8:6). He opines that the historic “creeds are really a summary of the New Testament tradition: the text and its history of interpretation” (p 22), on which see more here.

I do wish, however, he had teased out why the Eastern churches do not utilize the Apostles’ Creed. He boldly states “the Apostles’ Creed is the faith that all professing Christians should know, what all pastors and priests should teach, and what all bishops and theologians should defend” (p 26), yet previously observed that “it is not used in the Eastern churches” (p 25). This only piqued my curiosity, so I’ve some research to do on my own.

Chapter 2 shows the “symbiotic relationship between creed and canon” (p 30) and nicely illustrates and explains the relationship between the canonization of Old and New Testaments to the historical creeds. In my opinion, this is one area of strength in Bird, as he has written also and presented on the topics of inerrancy, inspiration, and infallibility of the Scriptures. He concludes the chapter with some practical ways the creeds can “invigorate” our faith.

Chapter 3 begins the exposition of the Apostles’ Creed and spells out the nature of faith in general terms, the “I believe” opening of the Creed in specific terms, and insists that “all of our life is a constant expression of faith” (p 47). Here he deals with faith as trust, faith and obedience, faith and reason, and the value of doubt (which I was please to read since I’ve written on this previously). He dispels the notion of a hard fideism (faith in spite of reason or doubt) and claims that “faith is not like a person blindly jumping in the dark. Faith is more like a leap into the light” because “faith in Jesus brings illumination to the world around us” (p 51).

Chapter 4 includes topics on the fatherhood of God, the power of God, the Trinity, and the creator God, giving us a grounding in theology 101 and is solidly Trinitarian from start to finish.

Chapter 5 speaks to the divine and human natures of the Son and is an outstanding introduction to Christology. I do think that briefly introducing the notion of perichoresis (“mutual indwelling”) as it relates to the hypostatic union of the two natures of Christ would be useful here. This is a neglected motif in Trinitarian studies, even among academics, which has the unfortunate effect of beginners in theology never learning. As I’ve reviewed elsewhere, Charles Twombly’s Perichoresis and Personhood does a tremendous job in showing how perichoresis applies to the hypostatic union of Christ’s human and divine natures.

Chapter 6 unpacks the role of Jesus as Messiah and Lord and clearly ties together various biblical themes (kingdom, covenant, Adam, Israel, redemption, et al.) into the person of Christ. Regarding Jesus’s lordship, Bird repeats “The term ‘Lord’ has become one of the most lifeless words in the Christian vocabulary” (from Carl Henry’s God, Revelation, and Authority 2:239) and laments “when the title ‘Lord’ lost its reverence, it also lost its relevance and was reduced to something like ‘a spiritually meaningful religious leader.'” For new believers or mature, this has immanent import on so many levels and there is much discussion and self-assessment that readers should consider here. Daily.

Chapter 7 explicates the “Virgin Birth”, which has been all but lost in today’s Christian parlance. It is rarely mentioned in blogs, sermons, Facebook posts, or even seminary classrooms, except to give it its due in a beginning systematic theology course. Bird here does a great job showing not only its importance, but in exposing its relative importance with regards to the crux of one’s faith. He wisely and reasonably argues:

While a view of Jesus that defines the virgin conception might be problematic,  a story of Jesus without it is not necessarily deficient. To say otherwise would be to render Mark, John, Paul, and the writer of Hebrews christologically challenged for not mentioning Jesus’s birth. For such reasons, I’m inclined to understand the nativity stories as a clarification to Jesus’s divine sonship rather than the necessary grounds for it. As a doctrine, the virgin conception is not essential to Christian testimony, but neither is it completely dispensable since it features prominently in a fully orbed doctrine of Jesus’s person. (p 102)

Bird rightly shows that the Virgin Birth does not play into the notion of Jesus’s sinlessness (pp 104-105), but does show the necessity of it in relation Christ’s humanity and especially to God’s redemptive plan through Israel. Moreover, and particularly poignant is how the birth of Jesus plays into eschatology.

Imagine a woman in the throes of childbirth, screaming in pain, with her legs spread apart. Imagine also that standing over the woman is a seven-headed dragon, who is crouched, poised, salivating, and ready to devour the child as soon as it is expelled from the birth canal. It reads like a nativity scene directed by Quentin Tarrantino, doesn’t it! But cast your eyes over Revelation 12[:1-11]… (p 105)

Wowsers! Of course this is a dramatic reenactment, but when one does read Rev 12 (and following) we find that the birth of Jesus is no small thing to gloss over.

This post covers the first half of the What Christians Ought to Believe and a follow-up post will conclude with a summary of the final 7 chapters. Meanwhile, I highly recommend to you Dr. Bird’s newest book and encourage it to be read and discussed in a small group, Sunday School class, or used as a foundation for a sermon series.