Summary of Where the Conflict Really Lies 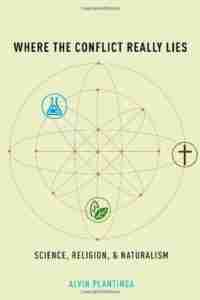 Where the Conflict Really Lies: Science, Religion, and Naturalism, the highly accalimed analytic philosopher Alvin Plantinga has made a significant contribution to both science and philosophy. It has spawned numerous discussions and journal articles that continue to evaluate and critique his argument. What follows is a summary review, originally written for the Rector of our church in his research on a series he presented regarding the confluence of science and faith.

Part I: Alleged Conflict (chapters 1-4)
Plantinga begins by arguing that those who insist on conflict between evolutionary biology or physics and theism have not properly understood these disciplines (pp 3-128). Conflict with theism is alleged, but not real, because evolutionary biology imports a philosophical “add-on,” namely, evolution is unguided. This “add-on,” however, is grounded in a misunderstanding of random genetic mutation. According to leading evolutionary biologists, “random” should be construed to mean “there is no correlation between the production of new genotypes and the adaptational needs of an organism in a given environment” (quoting Ernst Mayer, p 11) or “there is no physical mechanism (either inside organisms or outside them) that detects which mutations would be beneficial and causes those mutations to occur” (quoting Elliot Sober, p 12; author emphasis). Plantinga concludes:

God could have created life in all its diversity by way of such a process [evolution rightly construed, see below], guiding it in the direction in which he wants to see it go, by causing the right mutations to arise at the right time, preserving certain populations from extinction, and so on. (p 56)

So understood, the alleged conflict disappears. Trenchant critiques of Dawkins and Dennett are part of these chapters but will not be rehearsed here for the sake of brevity.

Special divine interaction (e.g., a miracle) is not incompatible with various laws of physics, since laws of physics apply to systems that are causally closed. The principles of regularity and predictability in the universe, fueled by the engine of physics, do not logically entail that there can be no deviations (a.k.a. divine intervention), given that the universe is an open system. In fact,

it is no part of Newtonian mechanics or classical science generally to declare that the material universe is a closed system. You won’t find that claim in physics textbooks—naturally enough because that claim isn’t physics, but a theological or metaphysical add-on …. Classical science, therefore, doesn’t assert or include causal closure. The laws, furthermore, describe how things go when the universe is causally closed, subject to no outside causal influence. They don’t purport to tell us how things always go; they tell us, instead, how things go when no agency outside the universe acts in it. (p 79; author emphasis)

As for the occasional divine intervention that allegedly conflicts with the consistency and regularity of the universe, Plantinga answers “There would be arbitrariness and inconsistency only if God had no special reason for acting contrary to the usual regularities; but of course he might very well have such reasons” (p 106, emphasis mine). Hence, because it is logically conceivable that God has such reasons, then any real conflict is illegitimate.

Part II: Superficial Conflict (chapters 5-6)
Maneuvers to discredit religion and/or treat it as illusion include a) positing that religion has evolutionary origins, such as adaptive advantages or b) religion is the product of “natural” means, which are derived from that material part of our cognitive architecture. But this produces only a superficial conflict because a) not every activity is intentional to some other end and b) mental states cannot be derived solely from material means (i.e., mental states are not mere brain states). There are no substantive defeaters to belief in theism from these maneuvers. [Incidentally, a “defeater” is a condition that obtains where the status of a belief is downgraded from “likely” to “not likely” or from “justified” to “not justified”. See here for more.]

Moreover, some scholars of Scripture use science to advance theories that allege it is highly improbable that Jesus rose from the dead, miracles occur, et al. But when a priori commitments to methodological naturalism are exposed (tantamount to another “philosophical add-on”), then Plantinga shows these scholars do not, in the end, provide defeaters to belief in theism or to “mere” Christianity.

Part III: Concord (chapters 7-9)
Fine-tuning of the universe and design perception based on our experience (Plantinga does not prefer design “inference”) are topics of chapters 7 and 8, respectively. Both promote a measure of concord between science and theism. Utilizing scientific means, fine-tuning and design perception offer positive, albeit limited, support for belief in theism. Plantinga believes fine-tuning (not design) is an inference derived from the kind of universe we would expect to see if God were to create it. The fine-tuning argument, therefore, does not carry the weight that many suppose. While both atheists and theists can agree on the physical constants that exist for a life-permitting universe, whether or not these constants are the product of an intelligent, intentional God or instead produced by chance is where the rub lies and where the degree of probability varies (see pp 194-199 and esp. related footnotes).

On the biological front, design and Michael Behe’s “irreducible complexity” are given a full treatment. Siding with the agnostic, Paul Draper, Plantinga opines:

Behe has not demonstrated that there are irreducibly complex systems such that it is impossible or even monumentally improbable that they have evolved in a Darwinian fashion…we don’t have a good way to ascertain the probability of the irreducibly complex systems, given the Chance hypothesis, and we also don’t have a good way to evaluate the probability of these phenomena, given an intelligent designer. (pp 231-232)

Plantinga concludes that “design discourse” rather than “design argument” is best, since design is something perceived rather than argued from deductive reasoning. Design, as classically conceived by William Paley, is an “immediate or direct impression” (pp 245-247) and more like Plantinga’s properly basic belief. Darwinian evolutionary theory provides no defeater unless, as previously mentioned, one imports the philosophical add-on of unguided, which expands the notion of evolution beyond its scientific and epistemic bounds (on the latter, see below).

Deep concord is found in “simplicity” and the corresponding beauty, which Plantinga accounts for in the imago Dei. Human ability to know things about the world results from the fact that humans are made in the image of a Knower (p 268). Just as with God, so with us: “there is a match between our cognitive or intellectual faculties and reality” (p 269). This correspondence or congruence is not a matter of luck, but what we would come to expect if we were made after the image of a God who knows. Therefore, it is more probable and reasonable to see this correspondence not as the result of chance, but of creatures made after God’s image. Other areas of concord between science and theism include “regularity, predictability, and constancy,” a belief that the world displays these qualities, the human ability to embrace the “inviolability of natural law,” mathematical ability and perception of abstract objects, a priori knowledge, logical necessity, contingency, and the like. (pp 282-303).

Plantinga takes “naturalism” to include “materialism” — the position that all of reality is comprised solely of material matter. But there is a problem here for the materialist view; namely, it is difficult to see how a belief can have content, since beliefs are composed of neurons and neuronal connections (i.e. brain states). Given that a property of any belief includes content, how then does content come to fill or be associated with a belief that is constituted only of material matter? The correlation of a belief to its content is not adequately explained on the materialist model.

Though not explicitly laid out by Plantinga, it is clear he proffers 3 versions of evolution (E) in chapter 10 (pp 307-350) and it’s important to keep these in mind with his argument:

With regards to unguided evolution [v1 above], Plantinga states “natural selection is interested in adaptive behavior, behavior that conduces to survival and reproduction; it has no interest in our having true beliefs” (p 271). However, regarding guided evolution [v2 above] and especially evolution qua evolution [v3 above], he offers:

As far as I can see, God certainly could have used Darwinian processes to create the living world and direct it as he wanted it to go; hence evolution as such does not imply that there is no direction in the history of life. What does have that implication is not evolutionary theory itself, but unguided evolution, the idea that neither God nor any other person has taken a hand in guiding, directing or orchestrating the course of evolution. But the scientific theory of evolution, sensibly enough, says nothing one way or the other about divine guidance. It doesn’t say that evolution is divinely guided; it also doesn’t say that it isn’t. Like almost any theist, I reject unguided evolution; but the contemporary scientific theory of evolution just as such—apart from philosophical or theological add-ons—doesn’t say that evolution is unguided. Like science in general, it makes no pronouncements on the existence or activity of God. (from “Evolution, Shibboleths, and Philosophers”, April 11, 2010, accessed August 29, 2016, emphasis original)

Addendum to Part IV:
A more formal way of putting Plantinga’s evolutionary argument against naturalism is:

The truth of evolution (E) is an epistemic defeater for naturalism (N), since the probability (Pr) of our cognitive faculties being reliable (R) is astronomically low. The most E & N can produce is survivability of a species, but neither E nor N can produce true beliefs. And, since our cognitive faculties only produce survivability behavior and not true beliefs, then we have no reason to trust any product of our cognitive faculties, including the true belief that they produce survivability. Thus, a belief in E & N caves in on itself, epistemically speaking. In addition, while N logically entails E, the reverse is not true, where E is understood as a guided mechanism. In other words, one can have E without N. I would offer, and I believe this is in concert with Plantinga, that one could even have E qua E [v3 above] without N and remain agnostic on whether or not God exists. Nevertheless, though the truth of E [all versions] is an epistemic defeater for N, E [v2 above] is not an epistemic defeater of theistic religion, given that E is guided and is a means God uses to produce the biological universe.

Additional Resources:
“Creation and Evolution” Podcast Series
“Is the theory of evolution compatible with theism?” by Terrance L. Tiessen