A Little Book for New Philosophers by Paul Copan 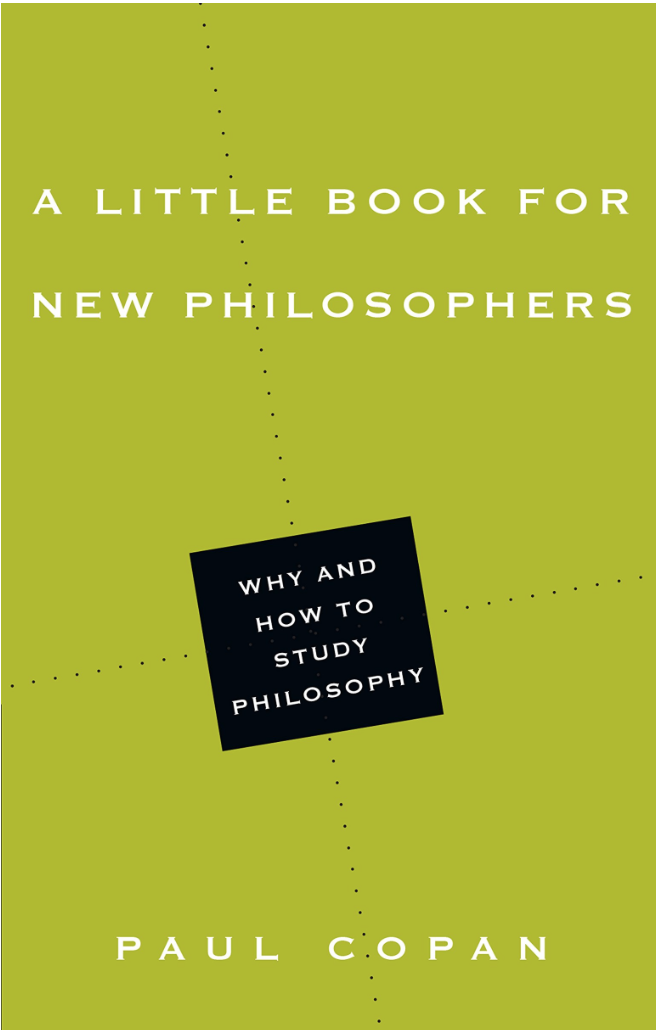 When I saw Paul Copan in November, 2016, at the Evangelical Theological Society’s annual conference held in San Antonio, I mentioned that I picked up his newly published A Little Book for New Philosophers. He kindly invited me to write a review. There are so many valuable insights throughout that I decided to post just a few here and offer some brief comments of my own. My hope is that this book will gain a wide readership because it is well-deserved.

Chapter 3, “Faith, Philosophy and Scripture”, deals squarely with the ideas that (1) faith is not fideism (the notion that faith is contrary to or hostile toward reason and devoid of empirical evidence) and (2) the place of motives in belief formation. Regarding the first point, Copan insists that faith is “trusting commitment.” He writes:

…such antiphilosophy claims are a mishandling of biblical texts [1 Cor 1:18; 2:14; Col 2:8; Jn 20:29]. In fact, they are antispiritual and antitheological: they insult the Spirit of truth (Jn 16:13) and the God who calls on his image-bearers to “reason together” (Is 1:18). The biblical faith is founded on evidences that are often publicly available and on powerful displays of signs and wonders. The word faith is primarily personal: it refers to our trust in and commitment to Christ. But this trusting commitment is no blind leap. It is well-grounded. Think of the act of choosing a spouse: we should have good reasons to commit to someone in marriage, but even so the marriage can’t happen without a personal choice….While [faith] is personal, it is not private.” (pp 44-45)

I could not agree more! As I’ve previously said, “faith and reason are friends and not foes…Like a composer and conductor, faith and reason work together to create a beautiful symphony that performs on the human heart and inspires conviction, hope, and reasonable certainty” in belief formation.

Even a modest view of faith necessarily includes faith in something beyond itself. After all, no one has faith in faith! It is faith that something is true (correspondence to an actual state of affairs) or faith in someone who has proven trustworthy. Faith is not some amorphous construct. Instead, faith has its object, or in Christian terms, its Subject.

On motives in belief formation, Copan highlights Merold Westphal’s “law of inverse rationality,” which I find fascinating from both a psychological and epistemological angle. The principle is this: “The ability of human thought to be undistorted by sinful desire is inversely proportional to the existential import of the subject matter” (p 56). Copan explains:

The less a matter cuts to the core of my being— my humanity — the less likely it is to distort my reasoning. So, for instance, my thinking is not very likely to be distorted when I perceive a yellow warbler in a branch just outside my window, which leads me to conclude that I am being appeared to warblerly. However, the closer the topic comes to the core of my being — moral choices, guilt, shame, ultimate authority, personal autonomy — the greater the tendency to “subordinate truth to other values”. The noetic influence of sin — the impact of sin on the mind — is bound to affect our philosophizing.

Let the reader let that sink in! For a very long time now I’ve claimed that unbelief is virtually incorrigible, by which I mean (partly): when we find that embracing a new belief may, in fact, have significant impact to our lifestyle, then we fight hard against that belief and seek reasons to falsify it, or at least devalue the belief such that it is not worthy of our allegiance. I cannot help but recall Thomas Nagel’s remarks many years ago:

I want atheism to be true and am made uneasy by the fact that some of the most intelligent and well-informed people I know are religious believers. It isn’t just that I don’t believe in God and, naturally, hope that I am right in my belief. It’s that I hope there is no God! I don’t want there to be a God; I don’t want the universe to be like that (from his The Last Word, OUP, 1977)

At the end of the day, reason, though necessary, is not sufficient to get the fool to see their folly. Believer and nonbeliever alike require not only enlightenment, but, most importantly, divine assistance.

Though you grind a fool in a mortar,
grinding them like grain in a pestle,
you will not remove their folly from them. (Pr 27:22)

On this latter group, I find there are many who fall into this category. It’s not as though they have thought long and hard about God’s existence and concluded against belief (atheist) or have examined reasons for belief in God and remain unconvinced (agnostic). Nor are they playing the “What if?” game, conjuring up inquiries ad infinitum that amount to a Zen koan (skeptics). Apatheists simply do not care to know. They have judged that knowledge of God is unworthy of their time, thought, or energy. For the apathetic, if ever the subject of God is broached, the only expenditure is some form of “WHATEVER!” (a.k.a. “TALK TO THE HAND!”). They then move on to something valued more – a mocha frappuccino, a digital screen, or perhaps even ice cream.

During the years I taught introductory philosophy at a community college, I saw a great deal of this mindset; what we know as apathy. Behind this attitude is a question of “So what?” or “What difference does it make?” To be fair, these questions are legitimate and it’s the instructor’s responsibility to show the relevance of new knowledge not already learned. But, this does not mean the student has no responsibility. As Copan notes

[apatheists] aren’t off the metaphysical or epistemological hook. Not all ignorance is innocent. There can be culpable ignorance, much like when we don’t know the speed limit. When the state trooper pulls us over, our ignorance of the speed limit is no excuse (p 73).

In addition, it seems to me that some measure of personal investment is required for learning to obtain. To take a dismissive attitude toward matters one is ignorant of is to miss out on knowledge that could turn out to be highly relevant, whether it is analyzing proteins of ribosomes in biology or the existence of God. The sad fact is (and, Yes, I recognize I just made a judgement using the word “sad”) that “people can spend their lives pursuing trivialities and diversions and never devote even a few hours to a serious inquiry into the ‘God question’” (p 73).

Those who fall into the category of apatheists really should evaluate whether or not the “God question” is worth their time. Why? Because ignorance of ultimate matters matters. After all, if you were wrong in your beliefs, wouldn’t you want to know? Moreover, ignorance is not bliss. Ignorance is, well, wait for it ….. ignorance and it could be costly (on the glorification of ignorance see NPR’s “Why Expertise Matters”). In his The Making of an Atheist Jim Siegel has noted some interesting psychological and existential correlations between belief and behaviors (see my notes here). If Spiegel’s thesis is correct – following Alvin Plantinga – that atheists are cognitively handicapped due to a de-sensitivity of moral truth and instead maintain an a priori penchant for immoral behavior, then could it be that the apatheists are intellectually or even emotionally compromised as well. I know this sounds incredibly arrogant, but I have to wonder:  Are there any detriments to exalting ignorance? Can the apatheists indefinitely stave off an epistemic commitment to God’s existence without implication? Blaise Pascal did not think so (see especially Douglas Groothuis’s On Pascal and his analysis there). Also, I’m hopeful that Greg Ganssle’s soon-to-be-released Our Deepest Desires will shed more light on this proposed existential dissonance of the apatheists.

Finally, I’ve always had a soft spot in my heart for doubt. Why? Because doubt can be fuel for certainty. But note, certainty in beliefs can be over-rated and we must be careful not to place too much value on it. Just a moment’s reflection on many of our deeply held beliefs will reveal a measure of uncertainty and some doubt remains.

Enter Paul Copan’s chapter “Doubting Wisely”. He offers a balanced and reasoned approach to doubt for Christians and for non-believers.

For believers, one of the principles he proffers is rejecting “the false and pernicious idea that knowledge requires 100 percent certainty”. The adverse effects of embracing this impossible burden of certainty for our beliefs includes many Christians who

routinely fall prey to perpetually second-guessing the Christian faith—“but what if…?” As a result, they are immobilized by doubts and make no progress in their journey with God.”

Not only does this cripple one’s personal relationship with God, but it stifles communication with non-believers seeking clarification about the Christian faith. I cannot tell you how many Christians I’ve known over the past 35 years who are intellectually handicapped in their discussions of the Christian faith with non-believers. Absolute certainty, despite how much passion and conviction one has mustered, does not exist (except with self-evident beliefs; the existence of God is not self-evident) and the sooner Christians recognize this, the quicker they will grow personally and relationally. (For an appeal along these lines, see my essay “Why Apologetics Is Important To Your Church”.)

For nonbelievers, Copan appeals to the principle of fairness for approaching doubt. “Those engaging in doubt should doubt fairly.” Not only should believers play fair and embrace this principle, but “this applies to atheists or agnostics demanding rigorous proofs for God’s existence or the realty of objective moral values.” After all “do they apply the same lofty standard to anything they themselves believe? Or are they operating by a double standard?” (p 109). And, when the question of evil slips in through the back door, Copan asks, “how do skeptics know with such great confidence that God, if he exits, could have no good reasons for permitting evil?”

Also, we should recognize that not all doubt is created equally. In the remainder of “Doubting Wisely” Copan breaks it down by offering a kind of anatomy of doubt. “Is it intellectual, emotional, moral, or spiritual” (p 110)? My experience has been that most doubt is taken as intellectual. But this can be an (un)intentional ruse for other kinds of doubt. Sometimes we have not dealt with emotional upheavals, which manifest in other areas of our lives that are seemingly unrelated, but that nevertheless affect us negatively and keep us from being productive (think PTSD, for instance). Apologetically speaking, I would argue that Christians must carefully and compassionately discern what kinds of doubt may be lurking under the covers when speaking with non-believers about their unbelief. Copan’s offerings here are priceless (along with Gary Habermas’s excellent Dealing with Doubt) and could be teased out into another book.

At the end of the day — and this hit me hard — “emotional doubts will never be satisfied with intellectual resolutions, no matter how solid and commonsensical they are.” I was left wondering how often I put forth an intellectual response to what is really an emotional inquiry and fell into the crowd of Job’s companions, Eliphaz, Bildad, and Zophar, who fail to bring true solace and relief in honest suffering and pain.

I’m very grateful to Paul Copan for A Little Book for New Philosophers and I will refer many to it and encourage everyone to pick it up and read! Even if you’re not a “new philosopher,” you’ll be better equipped to think because of it!