Kingdom, Hope and the End of the World 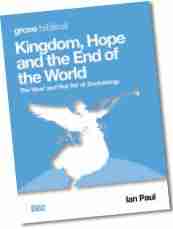 Kingdom, Hope and the End of the World: The ‘Now’ and ‘Not Yet’ of Eschatology is a concise introduction to a subject that continues to intrigue the Christian world, namely, “end times.” Ian Paul has done the Church a tremendous service in this offering and everyone would do well to have several copies on hand to pass along. I offer a few highlights here to whet readers’ appetites.

To be sure, there is much confusion and complexity around what happens in the future and this booklet will set the pace for fruitful discussions, providing a clear structure on which to navigate the relevant biblical texts. A nice complementary and fuller discussion would be J. Richard Middleton‘s A New Heaven and a New Earth: Reclaiming Biblical Eschatology and N. T. Wright’s Surprised by Hope.

The Introduction presents the relevance and import of eschatology (the study and understanding of “last things”). Paul gives three reasons why one should have a working knowledge of this topic: 1) it is a “fundamental theme throughout Scripture,” 2) to avert the “wild speculation” that plagues the Church and promotes confusion, and 3) provide “pastoral” insights for engaging neighbor, family, and culture in “disappointment” or “suffering” (p 3).

Chapter 2 utilizes the motif of “God as King” to sketch out the biblical storyline in the Old Testament. Readers are shown how all earthly kingdoms seek to usurp or fall short of God’s kingship and that Jewish expectations of the First Century anticipated the arrival of the “the coming of God’s anointed agent (Heb messiach, Greek christos),” which of course is Jesus of Nazareth (p 8). I have to say that this chapter alone is worth the price of the book. Christians have such a diminished view of and value for the Old Testament and have all but lost a fundamental knowledge of it. Paul summarizes key themes and nicely threads together Israel’s story, which is our story.

The Gospels and Acts come into focus in Chapter 3. Given the previous chapter, Paul naturally addresses the oft-repeated expression “kingdom of God” (“kingdom of the heavens,” Matthew) in the Synoptics (Matthew, Mark, Luke) as the “primary vehicle” for expressing the “all-pervading sense of anticipation and fulfillment” (pp 10, 9, respectively). Paul raises an important question that, I would argue, is the primary reason why so much confusion around “end times” exists. He asks “if Jesus is the fulfillment of Old Testament expectations, why do the New Testament writers still have a sense of expectation which continues to shape Christian theology” (p 11)? The answer, in part, comes from resurrection, which “breaks into the present age, rather than replacing it. [Jesus’s] resurrection is an anticipation of the resurrection of all at some later time” (p 11). Thus, as so many others have emphasized (esp. G. E. Ladd), there is an “already-not yet” tension to be embraced if we are to deal fairly with the inspired texts and the story that unfolds. Consigning too much or or too little to one camp or the other (“already” or “not yet”) breeds only confusion and begs more questions than answers. The resurrection of Christ is God’s sure sign that his kingdom is already upon us in this present age and that the life to come has begun, though not yet fully realized. The appearance of Christ is God’s intervention (“already”) and the reappearance of Christ (“not yet”) is God’s consummation.

Paul offers a concise and important discussion and analysis on the “Olivet Discourse” of Matthew 24 and Mark’s parallel in chapter 13. The “coming of the Son of Man” sayings of Jesus are key to understanding all the events. At the expense of possibly being too direct, the dispensational model is skewered by Paul as he pokes holes in every one of the main arguments offered in so many Christian churches across America. While I won’t begin to get into the history of dispensational theology, starting with John Nelson Darby, C. I. Scofield, and Lewis Sperry Chafer, their eschatology still permeates many (most?) Christian churches in America and has begotten a hermeneutic that leaves so very much to be desired. I applaud Paul (and others of his ilk) who are clear in challenging the erroneous conclusions proffered by the dispensational camp that takes the focus off of Jesus’s life, death, and resurrection and centers one’s hope on supposed events yet to come (p 17).

Chapter 4 zeroes in on the Apostle Paul’s end times views and the book of Revelation. This seems sweeping in scope, since Revelation alone would require another book[let]. But the author does an admirable job chunking out key themes and giving the reader a solid grip on the biblical data. The Jewish influences on the Apostle, along with seeing everything through the lens of Jesus’s life, death, and resurrection, shows how “God’s promised future has broken in” to shape everything he believes and writes (p 19). The Apostle Paul’s writings contain a rubric of tension between past, present, and future, and this runs throughout his ethical injunctions for believers. The plight of believers is that we live both in the “present age” and the “age to come,” experiencing existential dissonance as we struggle on the journey toward consummation. Paul maintains this is what the Apostle speaks of in Rom 7:14-25.

The appearing of Jesus (parousia) is outlined not as a rapture where believers are taken out of the world to avoid a tribulation (a view I have abandoned long ago but one that still grips most believers), but as a moment in time when believers accompany Christ to earth (pp 21-22). Otherwise, says Paul, Jesus does a “U-turn” by coming from heaven to retrieve believers, then returns to heaven in the same event (1 Thess 4). That Jesus’s appearing is sudden is not questioned. Where Christ ends up is scrutinized and the biblical data points to earth as Jesus’s destination upon his appearing. It is “in heaven and on earth and under the earth” where “every knee should [and will] bow” (Philippians 2:10).

Only two pages are devoted to Revelation in this chapter. However, Paul summarily (and I believe rightly) dismisses the thousand year reign as a literal one. He clearly and poignantly states that “taking this number (1,000) as literal alone of all the many numbers in Revelation, contradicts the overall eschatology of the book, makes Jesus [sic] return twice (or three times) in contradiction to eschatology elsewhere in the New Testament, and ignores its literary context” (p 23).

The final chapter, “Pastoral Implications,” touches on a number of issues from wild speculations about the timing of future events to Israel’s occupation of the land promised. On the latter, Paul is bold to claim, “there is absolutely no suggestion that the return of ethnic Jews to the geographical location of the land forms any part of NT expectation of Jesus’ return…After all, if Jews and Gentiles together are the new ‘Israel of God,’ what could such a ‘return’ look like (Gal 6.16)?” (p 25).

At the end of the day, “the key contribution of NT eschatology to Christian discipleship is to locate all that we do between the ‘now’ and the ‘not yet’ of the kingdom of God” (p 25). What this looks like on the ground includes “a great sense of expectancy when we pray for healing and alleviation of suffering.” And so, “we still live in the ‘end times,’ between Jesus’ coming and his return, the age when the Spirit of God can be poured out on every kind of person, and where God wants to perform signs and wonders” (p 25). Speaking of wonder, I wonder what would be different if God’s people embraced these pastoral implications!?

On life after death, Paul says very little unfortunately. I suppose space limitations were encroaching as I’m confident he could say much. That aside, he states that “we will live a transformed bodily life in transformed relationships within a transformed and renewed creation” (p 26), which is precisely the right summation of many others (e.g., N. T. Wright, J. Richard Middleton, Michael Bird, et al.).

Just as I opened these comments, I wish to reiterate that this is an excellent primer to eschatology and I would not hesitate to give it to anyone seeking to have a basic understanding of what Scripture says in this arena. It is a solid framework with which to begin one’s quest toward a fuller understanding of eschatology.

A very special thanks goes to Revd. Dr. Ian Paul for providing an advanced copy and his gracious invitation for me to provide comments on it.

Spread the word (please & thank you)
2017-05-08
Previous Post: A Little Book for New Philosophers by Paul Copan
Next Post: The Darker Side of Anger