Lucy Peppiatt notes in Rediscovering Scripture’s Vision for Women that common designations of “complementarian” and “egalitarian” do not adequately capture the tone and tenor of the two opposing camps typically offered in discussions around male/female roles. Instead she prefers the term “mutualists” over “egalitarians.”

“For mutualists, all interactions of men and women in church governance and the home are shared equally and expected to be for the mutual benefit of both men and women. Power and authority are both shared and adopted as either sex sees fit, with no fixed structures based on gender. Christian men and women are called to live in reconciled, renewed, and Christlike relationships with one another that subvert patriarchal patterns in all spheres.” (p 8)

On the hermeneutical front — and more to the point of this post — she opines:

no one is immune to cherry picking, confirmation bias, and being deaf to the commandments that we simply find hard to follow. It is a challenge, therefore, to listen to what the Bible says to us rather than filtering everything we hear, but it is a task we should apply ourselves to (p 77).

When we acknowledge our blind spots, then the stage is set for learning. But that’s not all. With learning comes change. Yet change is hard for some and impossible for others because those assumptions and structures we take for granted within our circles typically eclipse any need for a fresh look at things. A persistent yearning for consensus often gives rise to groupthink and church becomes just business as usual. 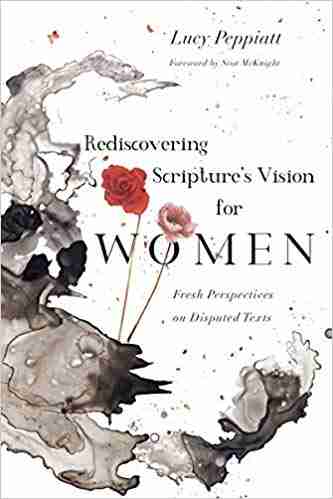 When approaching a text (ancient or modern) our starting points will largely define what we bring away from the text. The perennial task of anyone seeking to understand the Bible is to recognize that what we think we know may not in fact be what the writers intended to communicate.

One area that deserves a keen and careful approach is how Scripture speaks to women in leadership. I’m continually amazed by the unmitigated refusal to accept women in church leadership despite a plethora of publications that are solidly grounded in careful scholarship and a responsible understanding of God’s Word (see, e.g., Linda Belleville, Lynn Cohick, Cynthia Westfall, Marg Mowczko, Phil Payne, William Witt).

The Bible is not only God’s Word to us but it is also literature and we must, therefore, make use of the many devices available to discern its meaning and significance. Not only is there meaning to mine from specific words and the task of discovering how they’re used in context, but there is literary structure, genre, linguistic analysis, and the Sitz im Leben (the particular situation of a particular time and place) that must all be considered.

Take rhetorical argument as one example. It’s a device of conversing with one’s opponents and Paul uses it often in his letters to the Corinthians (cf., e.g., 1 Cor 6:13). In rhetorical argument opponents’ positions are documented, then a retort or rejoinder is offered within the same pericope or passage. Discerning where the stated opposing position begins and ends is not always straightforward. It was this maneuver that caught the eye of Scot McKnight when first reading Peppiatt (see his forward here).

In 1 Corinthians 11:2-16 Peppiatt submits that rhetorical argument is employed by Paul and she contends verses 4-5 and 7-10 is a case where Paul is echoing the Corinthians’ position and not stating his own. Particularly, the position of the Corinthian men who are husbands.

She urges us to consider that

if one insists that the entire passage reflects Paul’s views, then I concede that there is a compelling case for claiming that he believed that what one wears on one’s physical head is symbolic of a deeper spiritual reality [a common view], and that if women need a sign of authority on their head, it is a small step to imagine that men, as well as a veil, represent that authority, because man is the woman’s ‘head.’ For those who hold to these views and believe them to be binding on the church today, the challenge remains first to explain Paul’s distorted creation theology…; second, to reconcile the contradictions inherent in the passage; and, third, to explain how the practice of head coverings should be implemented today. As I have explained, I have already parted company with this view because I believe defending verses 7-9 as Paul’s view is difficult to justify (1) from the text, (2) from the whole letter to the Corinthians, and (3) from Paul’s wider thought (p 71).

If indeed husbands in the Corinthian church were behind the insistence on head coverings for their wives as a means of maintaining dominance (1 Cor. 11), then it’s easy to see husbands were likewise insisting that wives be silent and submissive in the public assembly (1 Cor. 14:34-35; cf., p 76). Paul’s response is clear and sharp in v. 36: “Or did the word of God originate with you? Or are you the only people it has reached?”

This reading is to be preferred since “as in all the churches of the saints” goes with the end of v 33 and is, therefore, not an introductory prescription by Paul for vv34ff (contra the paragraph break of the ESV). Moreover, that women / wives were to remain silent in the churches presumably contradicts what Paul has said in 1 Cor. 11 regarding women prophesying (see especially the extended discussion by Ciampa and Rosner in The First Letter to the Corinthians, pp 717ff).

While those passages of 1 Cor. 11 and 14 may indeed include rhetorical argument that puts forth the positions of the Corinthians rather than those of Paul, 1 Tim. 2:11-15 contain Paul’s instructions to Timothy on governing the church in Ephesus. Here, Peppiatt presented new evidence that I was unaware re: the cult of Artemis and which has significant bearing on meaning and significance of what is likely the most contested passage in the NT on women in leadership.

Drawing from Gary H. Hoag’s Wealth in Ancient Ephesus and the First Letter to Timothy: Fresh Insights from Ephesiaca by Xenophon of Ephesus, Peppiatt offers some startling findings (pp 148ff):

There’s more. But to my point, the Sitz em Leben has everything to do with how Timothy and the believers of Ephesus would have understood the inspired text. Peppiatt sums:

Clearly [these findings] would provide an adequate explanation of the reference to Christian women being saved/delivered through childbirth by God if they continue to place their trust in him by living Christianly and not with a foot in either camp…Being saved by childbearing is not within Artemis’s purview, as they had been taught, but God’s (p 152).

There is much to commend Lucy Peppiatt’s book and this post only skims the surface of the depths. I conclude with my review on Amazon:

When moving from “Scripture to doctrine to tradition to practice” (p 4), those assumptions brought to a biblical text are quintessential to the implication, application, and significance of a biblical text. Peppiatt offers a fresh and quite accessible perspective to challenge the male dominant framework that has itself dominated much of Christendom over the centuries. Equipped with a keen eye on the details, a thoroughly orthodox theology, and evident commitment to the authority of God’s Word, she invites readers to “rediscover” the relevant texts that have been used to bind or restrict women. A bright light shines not only on the frail and even faulty beliefs that so many for so long have assumed to be true but also on a path forward toward a biblically faithful and existentially viable solution. She points the way with grace, wisdom, and pastoral insight offering hope for a mutualist mindset of equality between the sexes in the home, the church, and the world. Whoever has ears to hear…. TOLLE LEGE!