When John W. Cooper’s Body, Soul, and Life Everlasting: Biblical Anthropology and the Monism-Dualism Debate came out I was not only intrigued but sold on his views of what it means to be an integrated human, body and soul. Much later J. P. Moreland’s The Soul: How We Know It’s Real and Why It Matters came out and, before it was published, I was asked to write a review of it (see here). Then, I became aware of Body, Soul, and Human Life: The Nature of Humanity in the Bible by Joel B. Green (my thoughts here) and most of my thinking was considerably upset with keen observations leveled against any hardened dualist view.

Now a refreshing breakthrough has come with Paula Gooder‘s 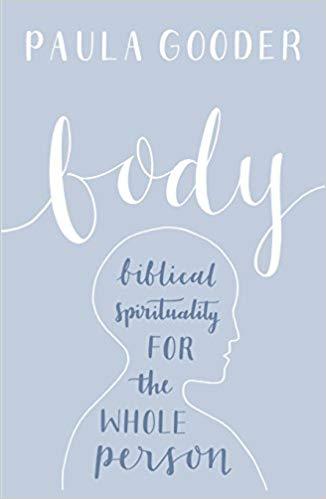 Body: Biblical Spirituality for the Whole Person. By my lights, her findings make exceptional sense of God’s Word. Whether or not one adopts all her conclusions, this book at least deserves a careful and thoughtful engagement. I find her writing especially clear and compelling as she presents a thorough analysis on what it means to be an embodied person. Her scholarship is evident but never once hinders her ability to unpack complex issues. Honestly, it is quite invigorating to read after pouring over not a few academically thick offerings on such a complicated and knotty topic. Some highlights follow.

By way of introduction, Gooder rightly laments that “what Paul says about the body has, historically, been read through the lens of a certain philosophical tradition — particularly that of Plato. As a result, Paul has been understood to be saying something profoundly negative about the body” (p 11). My experience is that while many Christians may be unaware or even unable to admit this influence, the dualistic mindset that pitches the physical against the ‘spiritual’ runs deep. And so, chapters 1-2 address the nature of the soul; chapters 3-4 the nature of the resurrection body; identity and life in the Spirit are themes of chapters 5-6; and Paul’s language about the body (personal, metaphorical, corporate, et al.) is detailed in chapters 7-8.

Chapters 1-2 are worth the price of the book, in my estimation. Sweeping much of the relevant history, Gooder shows the influence of Greek philosophy on modern positions taken regarding what constitutes the “soul” and its supposed relation to the body. Chapter 2 offers a comprehensive analysis of Paul’s use of the term psuchē (ψυχή , “soul”) along with OT reflections on nephesh. Surprisingly “nowhere in the Old Testament is there any hint of a split between body and soul” of the 760 times “nephesh” occurs. Strikingly, she observes that the NRSV and NIV translate psuchē (ψυχή) as “soul” once only of the 13 times Paul uses the term, suggesting the variegated ways in which it could be understood.

Chapter 3 speaks to the resurrection body, the chapter’s title. In it she offers some insightful remarks about the body of Jesus after he was raised.

“In the Gospels Jesus’ resurrection body is both continuous and discontinuous with his former body but not in the ways you might expect. Many people when thinking about resurrection suppose that their body will be recognizably them (continuous) but will be healed of all illness (discontinuous). In contrast, Jesus’ body was apparently not recognizable, at least not straight away (see Luke 24.16; John 20.14) but still bore the scars of his crucifixion (see Luke 24.38-40; John 20.27). In other words what was discontinuous seems to have been his appearance; what was continuous were his scars. This raises all sorts of fascinating questions about the nature of resurrection bodies…

The continuous and discontinuous nature of the resurrection body is not all. Jesus’ body was still clearly a physical body in that he could eat (see Luke 24.41-42; John 21.15) but was different in that it could passthrough [sic] walls (see John 20.26). N. T. Wright coined the phrase ‘transphysical’ for Jesus’ resurrection body – ‘trans’ to imply transformed but ‘physical’ to imply still an actual body. Such a view resonates with Paul’s position even if Paul does not state it explicitly. Paul’s link between Jesus’ resurrection and our own … therefore suggests that our resurrection bodies will be likewise ‘transphysical’ – clearly bodies, but different from the ones we have now.”

One such practical implication is broached in chapter 4 where she raises the question, will the physically ‘disabled’ person remain disabled after death? She opines:

[The question] assumes that ‘disabled’ people is not ‘normal’, they have something ‘wrong’ with them, which needs fixing. In my view this is the wrong starting point…everyone has something ‘wrong’ with them…we are all in different ways ‘disabled’, awaiting a future transformation….The most surprising feature of Jesus’ resurrection body is that it was still scarred — indeed, even more than that since Thomas was invited to put his hand in the hold in Jesus’ side. Jesus’ resurrection body was ‘disabled’ in that it still bore the holes from his crucifixion; but he does not appear to be dis-abled by them. This suggests that if we are hoping for a ‘Barbie’ or ‘Ken’ type of body in the resurrection we need to prepare for disappointment.

Chapters 7-8 lay out a framework for a theology of the Body corporate (the community of believers) that is rich with implications and begs for more. I especially appreciated Gooder’s emphasis on “discerning the body of Christ” (cf., 1 Cor. 11:29) and orienting ourselves both horizontally and vertically whenever we partake of the Holy Eucharist (Lord’s Supper). Elsewhere I’ve noted “because [the Holy Eucharist] is corporate, our orientation is not merely vertical as we individually look up to Christ in thanksgiving, but also horizontal and communal as we collectively look out to one another in love. As such, our personal standing with God is not the sole focus of the Holy Eucharist; our standing with one another is also in view.”

There is so much more from Body: Biblical Spirituality for the Whole Person but I’m hopeful this will whet your appetite. I want to end with one more practical note. In the epilogue Gooder encourages all Christians to think of their spirituality as including their physical bodies.

We should include physical wellbeing under the heading of spirituality. Taking time to take care of our bodies is a spiritual discipline and needs to be placed alongside prayer and worship in our thoughts about spirituality: sleep, exercise, pampering in a spa, having a well-cooked meal with friends are all part of spirituality and we should take care to ensure we do them regularly. They are not an indulgence, they are life-giving.”

Paula Gooder’s Body: Biblical Spirituality for the Whole Person is vital, especially for the church in America and I cannot recommend it highly enough. There’s nothing technical about it (though endnotes provide plenty for further research and should not be missed) and so very much to gain from it.

See also Ian Paul’s excellent post “Will We Be Male and Female in the Resurrection?”