Paul and the Hope of Glory: A Subversive Victory? 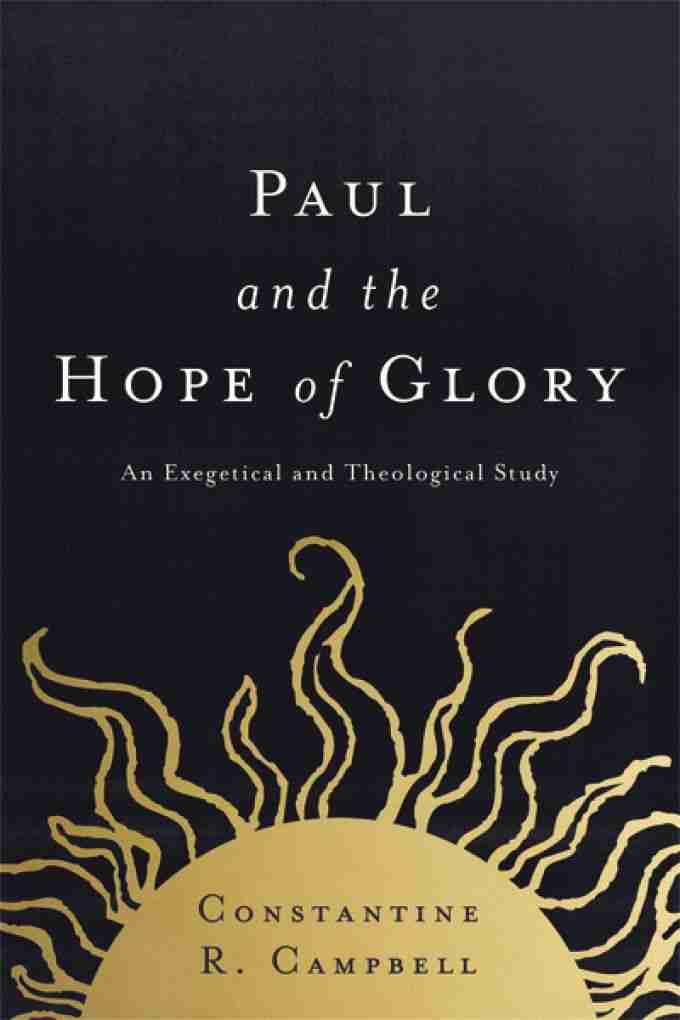 Paul and the Hope of Glory: An Exegetical and Theological Study Constantine Campbell has provided a significant and important contribution to eschatology from the writings of Paul the Apostle. What follows is just a teaser of “things to come” intended to provide some scaffolding for readers to stand upon as they work through this outstanding offering.

The book is divided into three parts with Part 1 (chapters 1-2) presenting introductory matters; Part 2 (chapters 3-13) providing a brief exegesis of relevant texts; Part 3 (chapters 14-18) integrating results from Part 2 with the end game of articulating “a comprehensive description of Paul’s eschatology” (p 8). Campbell closes chapter 1 with explicitly stating the book’s conclusions, which I find especially helpful and thoroughly Christocentric (no surprise coming from Paul)! These denouements serve not only as lenses through which to view subsequent chapters but, more importantly, make a strong and sure foundation for believers’ “hope of glory.” He writes:

Paul’s eschatology is shaped by two overlapping ages, with the new age breaking into the present day, thus creating two competing realms of authority and dominion. The gift of the Spirit connects believers to the new realm and shapes life now in preparation for a glorious future. Paul expects the parousia of Christ to usher in the resurrection of the righteous dead and judgment of all humanity. He believed that the entire created order would be renewed with the glory of God in Christ permanently radiating through it. He looked forward to Christ sharing his eternal glory with his people, who will enjoy perfected resurrected bodies made fit for eternal life with God in Christ. And at the very heart of it all is the death, resurrection, and ascension of Christ—past events from which Paul’s Christocentric eschatological outlook unfurls. (p 8)

Chapter 1 outlines the methodology and justification for limiting the scope to the canonical writings of the Pauline corpus. Drawing attention to the term most often used to describe “end times” Campbell clarifies:

Instead of referring strictly to “last things,” eschatology is now regularly used to refer to the so-called “overlap of the ages,” the “already-not yet,” —otherwise known as inaugurated eschatology…Paul perceives that the age to come at the eschaton has broken into the present through the resurrection of Christ. This means that the old age and the new age now coexist in an overlapping fashion. Hence Paul’s eschatology can no longer be restricted to “last things” since the “end” has already dawned in the “middle” of time, as it were. His eschatology must therefore include certain elements of contemporary existence. (p 5, emphases mine)

In other words, eschatology is not limited to a timeline of events leading up to the parousia of Christ still off in the future. In addition to future elements, eschatology has present implications with spatial connotations of “overlapping and competing realms, or dominions. Such realms are spatial in nature since they mark out the ‘territory’ over which their rulers exercise influence and power, controlling those who belong to them” (p 5). Practical implications will be clear to discerning readers as they move forward in the book.

After Chapter 2 helpfully rehearses contributions from Albert Schweitzer (1930) to N. T. Wright (2013), the notion of an “inaugurated eschatology” is further unpacked in Chapter 3, titled “Two Ages and Two Realms.” It is argued that the notion of “overlap of the ages” is “consistent with the eschatology of the whole New Testament” observing that “Paul’s realm theology is inextricably tied to his theology of the ages. While the notion of realm is spatial, the notion of age is temporal. This present age is one of sin and death, while the age to come is one of judgment and salvation.” Indeed “the future has broken into the present, creating two competing realms of authority orientating believers to live as belonging to the age to come rather than this present age” (p 65). What struck me here is that, aside from the author’s commentary throughout the chapter, a cursory reading from the catalog of selected Pauline texts makes the “two ages/two realms” rubric abundantly clear, given the reader has this in mind. Campbell’s remarks only provide the technical fortitude to formally solidify this framework (incidentally, his mastery of Koine Greek is undeniable, which is no surprise to those who know Campbell’s academic career).

In keeping Christ central, Campbell wonderfully captures the subversive and ironic means of God’s victory over sin and death (the old age, which remains “extant” for believers) through the cross of Christ. Regarding Colossians 2:14-15, he writes:

If such was intended by Paul (and I think it was), then Colossians 2:15 represents a genuinely apocalyptic statement. If by apocalyptic we mean that something hidden has been revealed, then the cross represents the ultimate apocalyptic event, since its appearance was opposite its reality. It appeared as a failure but was the victory of God over his enemies. Christ appeared stripped and disgraced, but in fact the powers were stripped and disgraced. The moment of Christ’s humiliation was the moment of God’s triumph.” (pp 95-96).

I could go on, but it is my hope this brief post generates a great deal of interest and, above all, secures a “certain hope” for things present and things to come. Paul and the Hope of Glory: An Exegetical and Theological Study is a brilliant tour de force and spectacular achievement deserving rigorous scrutiny from pastors, lay leaders/scholars, students, and academicians. In 2016 I had the pleasure of introducing myself to Con at the Evangelical Theological Society‘s annual meeting in San Antonio, Texas. Someday I hope not only to connect again but hear him play some live jazz. Meanwhile, I eagerly await his next offering!