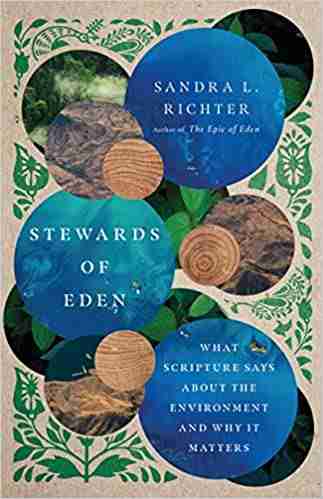 Sandra Richter’s book is difficult. Not intellectually, mind you. Far worse. It’s ethically demanding because it’s an eye-opening portrayal of God’s call for environmental responsibility. It addresses issues only the courageous will consider, but all are called on to engage. The concerns of creation care are not just critical, political, structural; they are ubiquitous. On every page this book is a biblical, practical, and down-to-earth call to action. Readers are not only informed about Scripture’s clear message of environmental stewardship, but challenged to make a difference. Richter’s purpose for writing Stewards of Eden: What Scripture Says About the Environment and Why It Matters is to provide a “biblical theology of environmental stewardship.” It is not overly technical and is especially accessible to all providing a robust case for why Christians must be involved with environmental issues. The first seven chapters argue that…

God owns this planet and that both the garden and Israel were “land grants” offered to humanity for their responsible stewardship … the themes of sustainable land use, humane treatment of livestock, care for the wild creature, respect for the flora and fauna of our leased land, and care for the widow and orphan are reiterated from Eden to the New Jerusalem. (p 107)

Chapters 2-6 ably and meticulously unpack biblical principles from the aforementioned themes. In each chapter she offers case studies of how these principles have been ignored or intentionally violated. The examples are poignant and (in many cases) contemporary reminders of our obstinate refusal to take seriously creation care and the impact it has on our “leased land.” Ironically, where humans were intentional to put profit or power over environment in an effort to show strength or to make life better, the net result was life made worse. Far worse! Walt Kelly’s Pogo cartoon, published on the 2nd Earth Day, 1971, speaks….again.

Chapter 7 addresses the nature of God’s judgment and the “Day of the Lord”. She keenly points out that God’s judgment also includes his mercy. “The day of Yahweh is the day when the Creator steps back into our dimension and says, ‘Enough.’ It is the day when death dies, the prisoner is freed, the oppressed is delivered, and the oppressor gets his due. This is the telos of both the Old and the New Testaments (p 96)….God shows up. In person” (p 97).

Most importantly, she demonstrates that “the great arc of redemptive history” never intended complete annihilation. Richter insists the thrust of the biblical data has restoration and redemption in mind for creation, not destruction and obliteration. She invites us to consider Noah and the flood (used analogically by Christ in Matt. 24:37) in which “God preserved the good planet he had made” (p 100).

After brief comments on passages that “seem to suggest” annihilation (1 Thess. 5:2-3; 2 Thess. 2:1-2, 7-8; 2 Pet. 3:10-13; Rev. 6:12-14, 17; Rev. 21:1), her focus turns to Paul’s encouragement from Romans 8:18-25. Richter states “rather than speaking in terms of obliteration, [Paul] speaks in terms of resurrection” (emphasis hers, p. 100). I do wish in this section she had not chosen the term “resurrection” because nowhere in Romans 8 is it ever used. Moreover, Richter later says it is the “resurrection of humanity with the resurrection of creation” that Paul juxtaposes (p 102). I see no reason why it could not read “redemption” instead of “resurrection” here as well. The biblical text states it is the “redemption of our bodies” and clearly all of creation is in view (8:23), so the juxtaposition is warranted. Even the language of creation shows an organic continuity between ʼādām (the first humans) and ʼădāmâ (the cultivatable soil). To be sure redemption entails resurrection, but her case would not have been weakened and possibly strengthened had she stuck to the biblical verbiage in this pericope. Redemption has the strong notion of liberation, being set free, etc., which the context undeniably has in mind for creation and humanity, given its “bondage to decay” and the like (see esp. 8:21). Still, Richter eloquently argues:

Throughout the book [of Romans] Paul reflects on the impact of sin on the individual, the community, and the race. In this passage he reflects on its impact on the cosmos. And he reminds his audience that all creation has suffered because of humanity’s rebellion. As a result, all of creation is anxiously awaiting “the revealing of the sons [heirs] of God.” Why does creation wait? Because creation itself has been subjected to frustration. The Greek in this passage suggests that “creation has been unable to attain the purpose from which it was created” [Doug Moo]. Why? Because ʼădāmâ (the cultivatable soil) was subjected to ineffectiveness because of the rebellion of ʼādām. God’s chosen steward failed in his appointed task, and so the creation over which he had authority was trapped within the self-defeating cycle of humanity’s rebellion as well. Creation experiences the same “bondage of decay” as does the human race….creation awaits its deliverance. (p 101, emphases hers)

Although the language of “redemption” as a kind of liberation would have better served the argument than the language of “resurrection,” the reasoning is sound, the rhetoric is faithful to the text, and the vantage point of mercy despite God’s judgment rings true! Christians can be sure that “with the return of the last Adam, the children of the first Adam will be born again into that which is imperishable” (p 101). That is hope!

Her conclusion reiterates our God-given task, namely, “to care for his garden, to serve it and to guard it” (p 109; see Genesis 2:15). The Appendix suggests practical ways to implement this vital commission God has given each of us. Richter poetically offers this proverb to capture the spirit of our divine charter:

The earth is the Lord’s and all it contains;
you may make use of it in your need,
but you shall not abuse it in your greed.

My recommendation will come as no surprise.

Dr. Sandra Richter is the Robert H. Gundry Chair of Biblical Studies at Westmont College. Her PhD is in Hebrew Bible from Harvard University’s Near Eastern Languages and Civilizations Department and her MA is in Theological Studies from Gordon-Conwell Theological Seminary. She has taught at Asbury Theological Seminary, Wesley Biblical Seminary, and Wheaton College. She has spent many years excavating in Israel and directing an Israel Studies programs. A prolific speaker and writer, her expertise in biblical theology and the intersection of Syro-Palestinian archaeology and Biblical Studies has produced an array of extremely popular books and curricula. She is also the author of The Epic of Eden.

Don’t miss Dr. Richter’s course “Stewards of Eden: Scripture and the Environment“. Watch the trailer and first episode for free!

Spread the word (please & thank you)
2021-01-27
Previous Post: Paul and the Hope of Glory: A Subversive Victory?
Next Post: Divine Forgiveness