Further re: the Imago Dei

Not a little ink has spilled over the centuries and not a few words have been spoken to date on what it means for humans to be created in the image of God. I’ve written before on the imago Dei and, though brief, the sum of my thinking goes like this:

The Bible declares that humanity is created after the image and likeness of the Creator (Genesis 1:26). Humanity is the created representation of God on earth and redeemed humanity reflects the image of Christ (2 Corinthians 3:18; Colossians 3:10; Romans 8:29; 1 John 3:2). However, the image is a copy of the original, not the exact replica.

Furthermore, both male and female together bare the image of the Creator (Genesis 1:27; 5:1-2a). The male and female collectively share in the fullness of the image, not each individually fully bearing that image. This suggests that within the sphere of the image there exists a social dimension (Genesis 1:26; 2:18). The first man was created as a “son of God” (Luke 3:38) and so is capable, apparently to Eve’s surprise, of passing on the image (Genesis 4:1; 5:3). Similarly, to be reborn of God is to restore the image and share, once again, in the steady growth and progress of being like God (2 Peter 1:4).

The imago Dei carries with it the privilege of and responsibility for ruling over the rest of creation (Genesis 1:26, 28; Psalm 8:6-8). The first indication of human speech is in connection with his dominion-having authority over animal life (Genesis 2:19). Rather than ruling over all of creation being a condition for having the image, more than likely it is a consequence of it. Whenever the theme of the image or likeness is present after Gen. 1, dominion over other life forms is never mentioned again (Genesis 5:1; 9:6; et al.). However, redeemed humanity will someday sit in judgment over the world and angels (1 Corinthians 6:3).

Since writing this, I read Dr. Catherine McDowell’s paper, titled “In the Image of God He Created Them: How Genesis 1:26-27 Defines the Divine-Human Relationship and Why It Matters“. In it she lays out four views of how the expression, “imago Dei”, has been understood. She offers a fresh, erudite, and very helpful interpretation that I find convincing. Her own interpretation runs like this: “to be created in God’s image is to be God’s kin, specifically, ‘son,’ with all the responsibilities and privileges sonship entails.”

The locus classicus is Genesis 1:26, which, in part, reads, “then God said, ‘Let us make humankind in our image, according to our likeness'” (NRSV). McDowell stresses that “what the terms image and likeness mean has been debated for centuries.” The first view is also the dominant one held “throughout the history of interpretation” taking the terms image and likeness to refer to “a spiritual or mental similarity to God with which humans were endowed at creation” (p 30). This is a nonmaterial view having to do with the “the incorporeality of God.” Although there is much to commend it, the nonmaterial view is not without problems, many of which McDowell highlights.

The second view, material or corporeal view of God where God takes on human form, also has a following. While some “material interpretation of image and likeness may seem far-fetched to those of us accustomed to thinking of God only in spiritual terms,” she argues the terms are taken too narrowly, since “image and likeness can refer to physical similarity, but they are not limited to it” (p 33). 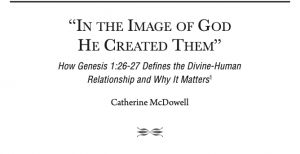 A third view, made prominent by Karl Barth, involves “interpreting image and likeness in terms of relationship,” since “when contrasted with the animals, humans are unique in their capacity to relate and respond to God, and, unlike the animals, they can enter into a covenant relationship with God” (similarly see Richard Lints’s view who argues the imago Dei is fundamentally relational). While this view is credible, McDowell proffers the relational view mistakes implications with meaning and “fails to ground its case in the text and within its biblical and ancient Near Eastern contexts” (pp 33-34).

The fourth view, grounded in ancient Near Eastern contexts, is known as the “royal representative” view wherein “these terms [image and likeness] in Genesis are royal designations for humanity—that is, human beings are God’s royal representatives on the earth.” This view is the prominent one with scholars to date but, regrettably and, I would argue, quite typically “does not seem to have made its way into the church in any significant measure” (p 34). Still, this view suffers from conflating implications with meaning. McDowell argues

Humanity’s royal status is, rather, derived from its identity as defined by image and likeness—that is, humans are endowed with royal status because they are created in the image and according to the likeness of God. Thus, while understanding these terms in their ancient Near Eastern context was certainly an interpretive breakthrough, the royal status and representative function result from—rather than define—the image of God. (p 34)

[Incidentally, one other position akin to the “royal representative” view is N. T. Wright’s take, which he apparently sees as vocational. Humankind was created with the essential and primary task of creatively imaging God’s glory and power in the “ordinary” world. He puts it like this: “the enveloping sense of the transcendent in the commonplace points to the living, loving, mysterious, and joyful Creator, who made us in his image, a little lower than the angels, in order to call us and enable us to reflect his loving creativity into his world.” (Broken Signposts, p 103)]

The remaining pages lay out her own view, which she calls “Correspondence, Kind and Kin” (pp 35-46). I find it quite compelling. Without dismissing the other views and also paying careful attention to ancient Near Eastern contexts, McDowell demonstrates the inspired biblical text is held foremost in her conclusions.

It is my hope that interests are piqued as I commend her paper to you.