The Structure of Biblical Revolutions: A Look at Beth Barr’s The Making of Biblical Womanhood

Thomas Kuhn’s now classic The Structure of Scientific Revolutions opened my eyes to the importance of having my eyes open. It helped me appreciate that before science can advance or be changed for the better, the same data must be viewed from a different perspective. Tracing the history of science, Kuhn chronicles the long and arduous task of getting the wider scientific community to see things differently before paradigm shifts can take place and progress is made. 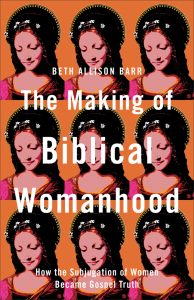 This is no less true for those cultural traditions and institutions held near and dear, such as the roles of men and women in the home, the church, and the world. While some books help us see things differently, not all differences should be equally valued simply because they’re different. But where historical findings show we’ve been short-sighted or wrong, then it’s time to listen. Beth Allison Barr‘s newest offering paves the way for a paradigm shift, and does so winsomely and charitably, personally and profoundly. As a historian, scholar, Christian, wife, and mother, she traces the power structures that have emerged through the centuries showing that a male-dominant culture (especially white, evangelical, male culture) wreaks havoc on everyone.

Breaking through strongholds of power and authority structures is not easy nor does it come quickly, just as Kuhn’s work showed. But breaking through them we must and keeping conversations honest and open around gender roles is vital to progress toward mutuality. This entails seeing the biblical data differently through hermeneutically responsible and historically informed lenses. Barr gives us both. And both are quintessential not only to progress but vital to getting at what the human author of Scripture intended and what God says through it. If we return to the same place we started where patriarchy remains the norm, then we’ve at least sharpened our thinking. On the other hand, if we embrace the error of our ways and make the necessary changes, then progress can be made, however gradual. Either way, a win is scored for all sides by reading Barr’s book.

Any reading of Scripture that subordinates approximately half of all humanity to the male population is tantamount to a kind of divinely sanctioned slavery because it diminishes the inherent dignity and honor of the imago Dei resident in everyone on the planet regardless of gender (see further here). While Barr alludes to this in the last chapter of her book, she does not unpack it. How we understand the imago Dei is crucial to how we treat one another. Either all humans are on the same tier or they are not. You must decide. Most troubling are those who continue to insist on male authority under the guise of a “biblical” womanhood or “servant-leadership” when in fact clear hierarchy and authority over women is at play (I’m looking at you, Wayne Grudem, John Piper, Denny Burk, et al.)! The disciples’ posturing for dominance and Jesus’s abrupt and adamant response, “Not so with you” should cause us to step back and consider that in God’s economy and kingdom only one is King; all human hierarchies are flattened. Service among kingdom subjects is carried out from under or alongside rather than over others, regardless of gender or station in life. See also Galatians 3:28 and my post here.)!

So, what’s the gist of the book? Glad you asked.

This book moves the conversation about biblical womanhood beyond Greek grammar and into the realm of church history–ancient, medieval, and modern–to show that this belief is not divinely ordained but a product of human civilization that continues to creep into the church. Barr’s historical insights provide context for contemporary teachings about women’s roles in the church and help move the conversation forward.

Interweaving her story as a Baptist pastor’s wife, Barr sheds light on the #ChurchToo movement and abuse scandals in Southern Baptist circles and the broader evangelical world, helping readers understand why biblical womanhood is more about human power structures than the message of Christ. (source)

The main ingredients baked into the recipe of a “biblical womanhood” are: The cultural thrust of a patriarchal society, combined with a full on commitment to inerrancy as the basis for biblical authority (don’t miss Scot McKnight’s excellent post regarding), and (for some) a belief in a heretical version of the Trinity that eternally subordinates the Son to the Father. These gave evangelicalism of the early 20th century the conditions for a perfect storm that continues denying women fully equality in the home, the church, and the world. This position became gospel truth and continues to come from some of the most popular pulpits and online portals today (think, Gospel Coalition and its members). Here’s how Beth Barr sums the progression of the problem from the vantage point of a conservative, evangelical reading of Scripture:

Not only does history show that women have always been subordinate to men (patriarchy), not only does the New Testament confirm that women should be subordinate to men (Paul), not only did the Reformation restore the importance and dignity of the role of wife and mother, but now we can state with assurance that female subordination is gospel truth. Women are created as distinct from men and, by the design of our female bodies, intended for domesticity and subordination. Women’s subordination even reflects the design of the Godhead itself. Just as Jesus is subordinate to God the Father, wives should be subordinate tho their husbands. The Bible clearly preaches female submission, and if we disbelieve the Bible on this account, then we call into question the entire veracity of the Bible. (p 200)

It is this line of reasoning that Barr’s book capably and charitably dismantles using the tools of history and her own experiences. Since evangelicals have weak historical chops, then they are easily gobsmacked by the cultural climate of their church and the wider evangelical network. However, as Barr says, we may not like history or we can ignore it, but it cannot be denied. History contains the threads that make up the fabric of our culture, which subsequently shapes our beliefs. Ignoring the voice of history only weakens our stance.

The arguments from The Making of Biblical Womanhood are reasonable, carefully documented, and soundly biblical. The structure of a biblical revolution has been laid and change is in the wind. Read it. Discuss it. Live it out loud. #MakingBiblicalWomanhood  #EndChristianPatriarchy

Watch this exchange between egalitarianism and complementarianism.

“What Are the Consequences of Theological Patriarchy?”

Consider also this resource titled “The Status of the Women in the Old Testament” by Dr. Myrto Theocharous, Professor of Hebrew and the Old Testament at the Greek Bible College in Athens, Greece.

Spread the word (please & thank you)
2021-05-22
Previous Post: Three Limitations on Freedom of Conscience
Next Post: Jesus and John Wayne: A Few Remarks