History scholar Kristin Kobes Du Mez rehearses the ingredients of a distinctly American evangelical culture. Like it or not, these ingredients promote or facilitate nationalism, racism, sexism, white maleness, authority, and political power. She argues (convincingly) that a “militant white evangelicalism thrives on a sense of embattlement” (p xviii). For me, reading through Jesus and John Wayne was an arduous task. Reviewing the perspectives, mindsets, and ideologies integral to the ongoing conflation of religion with politics in the name of Christianity in America was not easy. To sum the book simply, I would say it’s an especially well-written, carefully documented annotation of what has come to define evangelicalism in America. And there’s little to admire. 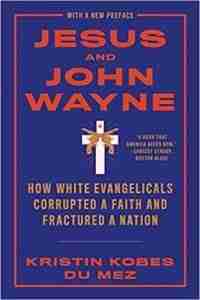 In so many ways this book was personal. Practically every page confronted me with the kind of Christianity I was exposed to the first few decades of my Christian life.

Having lived less than 2 miles from Focus on the Family campus headquarters, New Life Church (featuring the utter hypocrisy and massive moral failings of Ted Haggard; see here), and having spent 18 of my 20 years stationed at the Air Force Academy in Colorado Springs, there are not a few touch points that caused not a little grief as I look back (see especially pp 205-218). Still, I believe it’s important to understand what Du Mez reveals about an “evangelical, white, male faith” and the stronghold it has on the cultural it spawned.

I was reminded how an evangelicalism modeled after John Wayne, Braveheart, Mark Driscoll, James Dobson, Wayne Grudem, and John Piper (just to name a few) impacted me and my family. I found myself longing for a do-over. But I can’t have one. What I can have is an appropriate amount of recognition and determined refusal. I can identify and resist a false cultural narrative that is intentionally constructed for political gain in the name of Christianity. The historical lens of Jesus and John Wayne gives me this; gives us this, and readers will only benefit from seeing the stark realities she uncovers. In her own words, Jesus and John Wayne helps us in

understanding the catalyzing role militant Christian masculinity has played over the past half century [and] is critical to understanding American evangelicalism today, and the nation’s fractured political landscape. Appreciating how this ideology developed over time is also essential for those who wish to dismantle it. What was once done might also be undone. (p 304)

Whether intentionally embracing Christianity or not, readers who question how Donald Trump came to occupy the White House will find the backstory in this book. Many who submitted a vote for Trump (either in 2016 or 2020) will discover reasons that helped them decide for him and against his opponents.

Du Mez’s writing is straight-forward, objective, and fair-minded. There’s no agenda here. One reason I maintain this is because I found myself regularly wondering where she stood on many of the issues she critiques. Yet, she was careful not to bring in her own biases and state her own positions in distilling the data and presenting the information as it unfolded historically. Du Mez accurately captures what has transpired, some of which may in fact be shocking to learn. Of course, the naysayers could always find different ways to read history. I find her conclusions reasonable, well-documented, and believable.

It is my hope that all Americans (especially those who name Jesus Christ as Lord) will not only read Jesus and John Wayne but experience an awakening. It won’t be easy. But it will be necessary for any hope of deconstructing the idolatry of what evangelicals have come to embrace.

Watch an introduction to the book with the author here.

Jesus and John Wayne: A Fair Portrait of Evangelicalism?

Spread the word (please & thank you)
2021-06-26
Previous Post: The Structure of Biblical Revolutions: A Look at Beth Barr’s The Making of Biblical Womanhood
Next Post: The Virtues